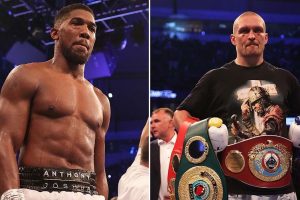 The former unified heavyweight boxing champion, 32, will look to reclaim his WBA, IBF and WBO belts from the Ukrainian in Jeddah, Saudi Arabia. It comes despite the clash initially being expected to take place on July 23, according to various reports.

It will see both Joshua and 35-year-old two-weight champion Usyk return to the ring for the first time since the former was outclassed and dominated in front of 60,000 fans at Tottenham Hotspur Stadium. AJ narrowly avoided a knockout but was defeated by unanimous decision on that occasion back in September.

Matchroom promoter Eddie Hearn recently claimed that media obligations meant the initial set-date for July was unfeasible and likely to be pushed back to August.

Hearn had said: “There is the potential to be pushed back a couple of weeks. It’s being discussed, with both sides. I got a call last night with [Usyk promoter] Alex Krassyuk and [manager] Egis [Klimas] about it. There is so much to do you get to a stage where July 23 is seven weeks on Saturday and part of our obligation is to do a media tour.

“Is it more sensible to do a media tour and give it more time to do it properly? It is not that someone is injured, everyone is desperate to fight. Both want to fight again in December. Pushing it two or three weeks is OK but we don’t want to go any longer because then December goes. July 23 is not gone yet but sort of every day that passes [it seems less likely].”

Do you think AJ stands a chance against Oleksandr Usyk on August 20? Let us know in the comments section.

Joshua is now the underdog heading into August's rematch for one of the first times in his 24-2 professional career. And he has been on the receiving end of some ridicule by several fellow fighters, including WBC heavyweight champ Tyson Fury.

Fury added to the pressure by claiming AJ will suffer his third defeat. He is adamant that the Watford fighter will be dominated due to his lack of stamina, but has offered to train Joshua himself.

The Gypsy King told The Unibet Lowdown on Frank Warren’s YouTube channel: “Unless Anthony Joshua gets his a** up to Morecambe and lets me train him for this fight, Robert Garcia and ten men like him will not make him beat Usyk.

“If he gets on Usyk from round one and tries to push him and be aggressive, he’ll get gassed in four rounds, starts hanging around by five rounds and gets stopped in six or seven.

“If he comes to Morecambe Bay, I’ll teach him how to be a real Viking man for twelve rounds and how to deal with these little middleweight people, then he’ll get a win. Other than that, I see him getting beat again. Two in a row, baby and it’s over.”