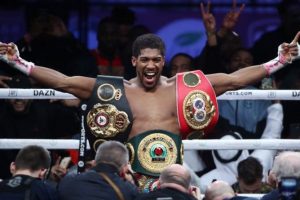 Anthony Joshua and Oleksandr Usyk have finally put pen to paper and officially scheduled their fight for September 25 this year. The bout will take place at the state of the art Tottenham Hotspur Stadium in front of a capacity crowd, thanks to newly-relaxed Covid restrictions.

In a risky encounter, AJ will pit his WBA, WBO and IBF belts against his Ukranian opponent who proved himself as a formidable force in the cruiserweight division before moving up.

Despite having only two fights at heavyweight, Usyk became the mandatory challenger to Joshua’s belts.

Although Usyk may not be an overly familiar name to some casual boxing fans, he comes into the bout extremely highly-rated after a stellar amateur career and an undefeated professional resume so far.

It will be a meeting of two fighters at the very top of the sport, having both won gold medals at the London 2012 Olympics.

Joshua said: “The date is set and we are fully locked in. September 25, Tottenham Hotspur Stadium, I put it all on the line again and it’s time to defend my crown.

“We are two Olympic gold medallists who have fought our way to the top and never avoided challenges.

“The stadium is exceptional, the atmosphere will be electric, I’m honoured to be the first person to fight in such an awe inspiring venue.

“The stage is set and I am ready to handle business.”

There was thought to have been a delay in finalising the contracts due to the issue of a rematch clause, something which Joshua’s camp was insistent on but Usyk’s could have done without.

The opportunity for AJ to win his belts back, should his fight not go to plan in north London, is deemed as imperative in light of his shock defeat to Andy Ruiz Jr in 2019.

With the date now set in stone, British fight fans are now poised to see a fascinating bout, although it was not the classic all-British scrap between Joshua and Fury that many had hoped for.

The two camps looked to be making progress in arranging that fight earlier in the year, only for a clause in Deontay Wilder’s contract to rear its head which demanded a third fight with the Gypsy King.

As such, Wilder and Fury are set to faceoff once more, now rescheduled for 9th October after a COVID outbreak in the Englishman’s camp.

If AJ and the Gypsy King are destined to meet in what would be a fight for the ages, they must both overcome extremely dangerous opponents in the next few weeks.

Clearly, Joshua must take it one fight at a time and in no way underestimate his upcoming opponent who, despite being a relatively unknown quantity at heavyweight, has put together an exemplary career so far.