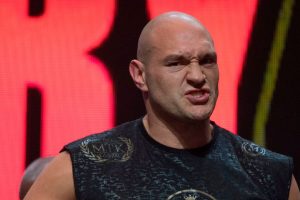 AJ traded insults with Fury on Twitter earlier this week amid the collapse of their undisputed heavyweight showdown, with the latter instead ordered by a US court to face Deontay Wilder in his next fight.

The unified champion was left baffled after Fury claimed only 24 hours earlier that their proposed Saudi Arabia clash was finally confirmed, taking to social media to brand him a "waste man".

Joshua wrote: "If there was an arbitration going on, why announce to the world we are fighting!

"The fight was signed! UNDISPUTED. Bare knuckle? You’re a good kid, don’t play with me Luke! I’ll slap your bald head & you’ll do nothing! Waste man."

Joshua has followed Whyte in calling Fury "Luke", which the Bodysnatcher believes is his real name.

In an interview with The Sun back in December, Whyte said: "My real name is Dillian. I know his real name is Luke.

"He changed it to Tyson to make himself sound harder.

"People can have a little look around on the internet and see for themselves.

"In boxing, the name Tyson is a lot more sellable than Luke.

"A lot of what Tyson does and says is a game, you can never take anything he says seriously or at face value.

"He might say he wants to fight me sometimes but how can you trust a man who doesn’t even use his own name?"

And Fury's father John insists he was named after heavyweight legend Mike Tyson because he defied a slim chance of survival from doctors when born prematurely.

“He’s fought hard to become a person living in this world. Mike Tyson was the best in the world at that time.