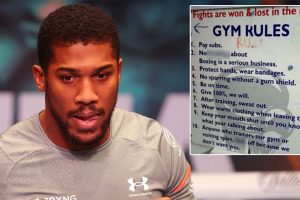 Anthony Joshua has set out the 10 commandments of his boxing gym whilst warning any "spies and traitors" to stay away.

The list featured generic rules such as paying subs and showing up on time, but also included two warnings to the members.

"Keep your mouth shut until you know what you're talking about," the ninth rule on the list read.

And the final rule warned visitors: "Anyone who traitors our gym or visiting spies, f*** off because we don't want you."

Joshua is on a comeback mission to reclaim his heavyweight titles after losing them to Oleksandr Usyk last September.

The loss marked the second time 'AJ' has lost his belts in four fights, meaning he can become a three-time champion if he avenges his loss to Usyk.

No date or venue has yet been revealed for Joshua and Usyk's rematch, but promoter Eddie Hearn recently said the "preferred" location would be the UK.

And Joshua confirmed he will change from his usual training camp in Sheffield to work with coaches other than Rob McCracken for the fight.

“I’m a loyal character. I believe loyalty’s important," he said whilst appearing at Expo 2020 in Dubai.

“I’ve been based in Sheffield and had a good chat with my coach and I want to try some new things, I want to try a new environment.

“That’s what 2022 holds for me. Revamping, reorganising, a new environment and staying at the top."

Hearn labelled Joshua's decision to test the waters for another coach as a "big risk" ahead of his rematch with the former unified cruiserweight king.

Joshua has worked with McCracken since his amateur days, winning the unified heavyweight titles twice together and claiming an Olympic gold medal in 2012.

Can Anthony Joshua win back his heavyweight titles? Let us know your thoughts in the comments section below

And the Brit said he will get into a "warrior mindset" to prepare for his rematch with Usyk in a new environment.

"People ask me 'what does it take to get to the top?' But that's the easy part, staying there, that's the hustle so staying there is a whole other category," he continued.

"We're not talking about staying there for a year or two, do you want to stay there for five or ten years? That's when the sacrifice happens.

"Now is probably the time in my career where when I get home I'm going to put in some real work and make some sacrifice.

"It's all good, everything will make sense in the long run, but as it stands now I'm going for a new environment, to work with some new coaches and just go to war. It’s a warrior mindset.”