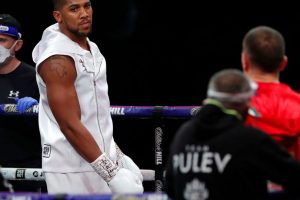 Eddie Hearn is hopeful of agreeing a deal for Anthony Joshua to face Oleksandr Usyk after requesting an extension to the deadline for an agreement.

British star Joshua has been mandated to face Usyk by the WBO after his undisputed showdown with Tyson Fury collapsed.

The WBO ordered negotiations to be completed within 10 days on Friday May 22.

But Matchroom promoter Hearn has revealed the deadline has been extended.

If the WBA, WBO and IBF heavyweight champion doesn't agree terms with the Ukrainian former cruiserweight king then purse bids will be ordered.

Hearn said: “The deadline has been extended for another two or three days which we are speaking to the WBO about.

“Then purse bids will be called for seven days' time and you can do a deal up to the purse bid date. “Conversations are positive, we have a good relationship with Usyk's team.

“We haven't reached a deal yet but we are hopeful that we do.”

Joshua's other option is to relinquish the WBO title and face old rival Dillian Whyte, who he stopped in seven rounds back in 2015.

But that would seem a bizarre move for the Watford warrior who has been on the self-styled 'Road to Undisputed' and is still plotting a December clash with WBC champion Tyson Fury, who faces Deontay Wilder next month.

Hearn, meanwhile, has announced a five-year exclusive UK TV deal with streaming giant DAZN to end a decade with boxing on Sky Sports.

The new contract starts next month but does not include Joshua.

The British star has one fight left with Sky Sports and Matchroom so his clash with Usky or Whyte will be on the subscription broadcaster's Box Office channel.

Joshua, 31, is set to sign another long term deal with Hearn's promotional company but his next TV contract is still up for grabs.

Hearn said: “ This deal with DAZN doesn't include AJ, there's nothing in the contract that dictates we have to bring AJ to DAZN in the UK.

“It will be a decision taken in the best interests of Anthony Joshua.

“It is up to AJ, his management 258 and Matchroom to discuss the best option.

“I'm sure there will be an announcement in due course on AJ and Matchroom.

“That relationship will only end when he hangs up his gloves.

“In terms of his broadcast deal there is no pushing to DAZN for AJ, it is up to us to look at the market place and opportunities.

“He has a great relationship with Sky as well and they will be keen to extend that relationship beyond whatever fight happens in August or September.”