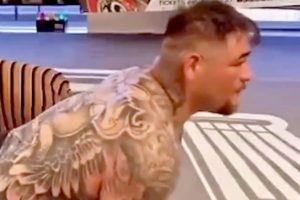 Andy Ruiz Jr looks in fantastic shape ahead of his next fight in training footage shared on social media.

Ruiz will be a familiar name to most UK boxing fans thanks to his rivalry with Anthony Joshua. The Mexican heavyweight shocked the fighting world in June 2019 when he dealt Joshua the first defeat of his professional career. AJ bounced back to reclaim his belts later that year.

The 32-year-old has fought just once since that defeat to Joshua in December 2019, beating Chris Arreola by unanimous decision in a low-key event just under 12 months ago. Known as The Destroyer, Ruiz was in bad shape for his second meeting with AJ, weighing in at 284lbs.

After being mocked for his rotund appearance, the 34-2 fighter weighed in two stone lighter at 256lbs for his May 2021 bout against Arreola. And he's keeping himself in excellent nick ahead of his return to the ring opposite Luis Ortiz on September 4.

In a video shared on social media by ESPN Ringside, Ruiz can be seen getting a sweat on as he works out in the squared circle. The star looks lean and mean in the footage, which received a positive response from fans.

"Dang he's lost hella weight," wrote one observer. Someone else added: "Looking at how he has got in shape you would think he really wants it."

As a third person said: "Damn! Ruiz looks good." While a fourth user commented: "Wow….what a transformation." Another boxing fan chimed in with: "Phenomenal."

How do you think Andy Ruiz would get on against Tyson Fury? Let us know your thoughts in the comments section below.

Others speculated that Ruiz's leaner physique could even pose a problem for Tyson Fury in the not to distant future. "In shape Ruiz is scary for a lot of people including the champ," one user wrote.

Ruiz admitted last year that he needs to remain disciplined with his weight, saying: "I'm way better than I was before but I want to be at like 235lbs, 235-240lbs, but strong, be lean. For me to be there I gotta stay consistent and I gotta stay disciplined.

"I gotta keep working hard. And before I used to train when I had a fight coming so Canelo's been telling me I have to be training even when I don’t have a fight…I just gotta stay busy and focus on what they've been telling me."

The proof will be in the low-fat pudding for Ruiz when he takes on Cuban veteran Luiz Ortiz in Los Angeles on September 4.