‘A scared little boy’: How Kambosos jnr won the mind games against Lopez

George Kambosos jnr can pinpoint the exact moment he got under Teofimo Lopez’s skin.

It occurred more than six months ago in Atlanta, the first of a series of press conferences to promote a fight that will, after half-a-dozen false starts, will finally take place at New York’s Hulu Theatre on Sunday.

At a theatre full of journalists, the brash American was talking himself up and Kambosos down, prompting the Australian to climb out of his chair and eyeball his opponent. As the insults flew, they stared each other down.

Lopez was the first to blink.

“He’s been rattled since that first face-off in Atlanta in April,” Kambosos told the Herald.

“With all the tension that has gone on, he’s very rattled, especially when you’re trying to make weight, he’s struggling, big time. He’s not in a good place. It’s going to be a very tough battle for him to even get on them scales.

“I could see how dehydrated he is.

“He really doesn’t want to be here. He wants to sit there with the belts, especially when you’ve got a guy like myself, a killer, coming straight at him.

Tensions between the camps have ratcheted up significantly during fight week. On Wednesday, their fathers – Teofimo Lopez snr and George Kambosos snr – had to be pulled apart after almost coming to blows. The older Lopez mouthed off at a media day and crossed into the space of the opposing camp. The Kambosos clan would have none of it. 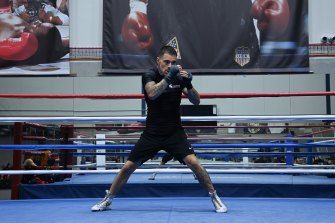 Australian boxer George Kambosos jnr is confident ahead of his fight with Teofimo Lopez.Credit:SMH

“He’s a little chihuahua and he stepped on a rottweiler,” Kambosos jnr said.

“They’re very lucky my dad didn’t really unleash because you saw it straight away, he backtracked and starting screaming and tried to paint himself the victim.

It was more of the same on Thursday, the fighters flinging insults during another public appearance. These exchanges are common in boxing, the theatrics often put on to help sell tickets to the event.

However, the bad blood between these pugilists is genuine. If it was Kambosos jnr’s tactic to get inside the head of his opponent, it has clearly worked. Lopez, who puts his WBA, IBF and WBO lightweight titles on the line, has been outpointed during the verbal exchanges.

At one point Kambosos jnr put his hands on one of the title belts and said it was inevitable they would all return to Australia.

“He’s very upset and I believe that’s nervous energy, it’s a fear of what I bring to the table,” Kambosos jnr said.

“I was nice and fresh today, looking like a businessman. This is business for me. I’m a killer, but I’m cool, calm and collected. I don’t take it personal, I don’t get emotional, I’m just here to do a job.”