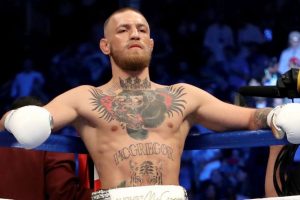 Logan Paul went the distance in his eight-round exhibition with Floyd Mayweather on Sunday night – meaning his boxing career is likely just getting started.

The YouTube sensation was expected to be knocked out in brutal fashion by Mayweather, widely considered one of the greatest fighters in history.

Instead, Paul put in an admirable performance to ensure he heard the final bell, dodging most of the boxing legend's attacks and doing his best to spoil the contest by grabbing hold of him.

And while a rematch with Mayweather is highly unlikely, given his 44-year-old opponent suggested that he will not take part in another exhibition in the future, the 26-year-old will no doubt set his sights on a new ring rival.

We've picked out four potential next opponents for Paul, some of whom are admittedly a little more ambitious than others.

Logan's boisterous younger brother Jake has been calling out the UFC superstar for just under a year now, targeting him and fiancee Dee Devlin in a foul-mouthed video message back in December.

But following Mayweather's tame performance against Logan, McGregor may be tempted to meet the other Paul brother and do a better job on him than his old rival.

That would have to come in the boxing ring, nevertheless, as Paul admitted prior to Sunday's exhibition that he would be out of his depth facing him under a MMA ruleset.

One man Paul would happily face in the Octagon is Canelo, who currently sits on top of boxing's mythical pound-for-pound throne.

However, Mexico's four-weight world champion is unlikely to be enticed by any type of exhibition with a YouTuber, let alone an MMA contest, after posting a face-palm emoji on Twitter during Sunday's exhibition.

Paul said last week: "I'll do MMA with Canelo. Yeah, for sure. But guess what? He'll never do it. He's tough in his sport, but he'd never do MMA. That'd be crazy."

The first and only professional bout of Paul's newfound boxing career came against fellow YouTuber KSI in 2019, meaning he may set his sights on revenge against the Brit if other high-profile names are unavailable.

The pair also went head to head in an amateur clash before Eddie Hearn's Matchroom company jumped on board for the rematch, which ended in a controversial draw.

And having come unstuck when they met without headguards in the pro ranks, Paul would undoubtedly jump at the chance of a trilogy with his arch-nemesis, who doesn't have bundles of options on the table himself.

Professional fights between blood relatives are practically unheard of in the sport of boxing, yet Paul suggested he would be prepared to lock horns with brother Jake at some stage in the future.

"Fighting Jake Paul? I don't know, I don't know bro. You know we love each other you know," he said in his post-fight press conference.

"But we also love putting on big shows, maybe down the line. Give us some time to like acclimate in this sport a little bit."