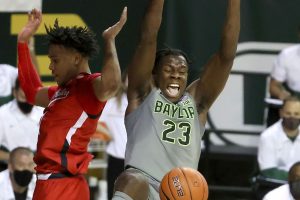 Gonzaga’s bid to go wire-to-wire No. 1 is in its final week.

The Zags received 61 of 63 first-place votes from a media panel in The Associated Press men’s college basketball poll released Monday as they attempt to become the first wire-to-wire No. 1 since Kentucky in 2014-15.

Baylor had two first-place votes and moved back into the No. 2 slot after dropping a spot last week.

Gonzaga won its ninth consecutive West Coast Conference regular-season title after going 14-0 and is the lone remaining undefeated team in Division I. The Zags (24-0) play Saint Mary’s in the WCC Tournament semifinals Monday night and would advance to the title game Tuesday with a win.

Win those two and Gonzaga will become the fifth team in the last 45 years to head into the NCAA Tournament undefeated.

“I don’t know about how important it is and all that. I mean it would be a heck of an accomplishment, quite frankly,” Gonzaga coach Mark Few said. “It’s hard to be the front-runner and lead the mile all four laps. Everybody’s gunning for you.”

Gonzaga will likely be a No. 1 seed regardless of what happens this week and could be gunning to become the first team to finish a perfect season since Indiana in 1975-76.

Baylor dropped to No. 3 last week after losing to No. 10 West Virginia in overtime on March 3.

The Bears were back to their dominating ways last week after their only loss of the season, beating the Mountaineers in the rematch, then taking down No. 12 Oklahoma State and No. 20 Texas Tech by double digits.

The win over West Virginia gave Baylor its first Big 12 regular-season title and moved it back into the No. 2 slot this week. The Bears finished undefeated at home for the first time in 73 years.

Arkansas has made quite a jump in two seasons under coach Eric Musselman.

The Razorbacks were in decent shape to make the NCAA Tournament in Musselman’s first year before the pandemic wiped out the end to the 2019-20 season.

Arkansas finished the regular season 21-5 and closed it out with seven consecutive wins, including at Kentucky and at then-No. 10 Missouri.

The Razorbacks entered the AP Top 25 on Feb. 15 and have made a quick climb, reaching No. 12 last week. Wins against South Carolina and Texas A&M last week moved them into the top 10 for the first time since Nolan Richardson led them to a No. 1 ranking and the 1995 national championship game.

No. 12 Oklahoma State and No. 16 Virginia had the biggest jumps of the week, moving up five spots each. … No. 25 Oklahoma had the biggest drop, falling nine places after losing four consecutive games, including 69-65 to No. 13 Texas on Thursday. … Southern California moved into the Top 25 at No. 24 after beating Stanford and rival UCLA last week. … Wisconsin dropped out from No. 25 following losses to Iowa and No. 23 Purdue.