The Milwaukee Bucks never trailed on the way to a 125-103 victory over the Toronto Raptors and a 2-0 lead in the east finals. 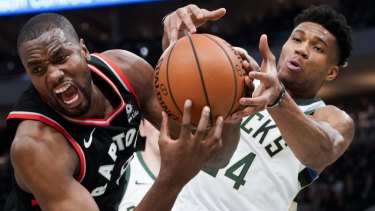 The eastern conference doesn’t belong to Antetokounmpo and the Bucks yet. But they’re two wins away, after Antetokounmpo had 30 points and 17 rebounds, while Ersan Ilyasova came off the bench to add 17 points. ‘‘He plays so hard, he lays it all on the line, every time,’’ Bucks coach Mike Budenholzer said.

‘‘It was a great start for us. I think everybody fed off of Giannis and how he started the game.’’

How he finished, too. Antetokounmpo scored 11 points in the fourth for the Bucks, who wound up with six players in double figures – three of them reserves. Nikola Mirotic scored 15, Malcolm Brogdon had 14, George Hill 13 and Khris Middleton 12. Kawhi Leonard scored 31 points for Toronto, who gave up the game’s first nine points, never led and trailed by double digits for the final 39 minutes.

Kyle Lowry scored 15 and Norman Powell had 14 for the Raptors. ‘‘We didn’t do much well tonight, obviously,’’ Raptors coach Nick Nurse said.

Game three is on Monday (AEST) in Toronto.

Milwaukee, who led the NBA with a 60-22 record during the regular season, became the 16th team to start a play-off run with at least 10 victories in its first 11 games. Only three teams – the 1989 Los Angeles Lakers, the 2001 Lakers and the 2017 Golden State Warriors – started a post-season 11-0.
The Bucks led by as many as 28, before Toronto did just enough chipping away to keep some semblance of hope. Eventually, Antetokounmpo decided enough was enough.

With five minutes 51 seconds left to play, Antetokounmpo backed Leonard down on the block, spun back towards the centre of the lane, scored while getting hit and starting a three-point play. He yelled to the crowd and punched the air.

The knockout blow was landed, and the Bucks are two wins from their first NBA finals berth in 45 years.

‘‘When the game started, we did a great job setting the tone,’’ Antetokounmpo said.

Meanwhile, this series has plenty of representation on the list of finalists for the NBA’s top individual awards.

Antetokounmpo is assured of being the Bucks’ highest finisher in the MVP race since Kareem Abdul-Jabbar won the award in 1974.

■ Tyreke Evans has been dismissed and disqualified from the NBA for violation of the NBA Players Association’s anti-drug program.