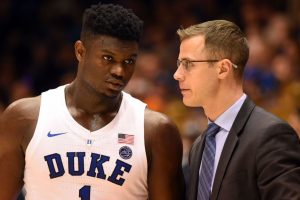 The man likely tasked with replacing the winningest college basketball coach ever is a former Duke player who moved to the Blue Devils’ bench just eight years ago and was promoted to associate head coach in 2018. Scheyer has never been a head coach.

Mike Krzyzewski single-handedly turned Duke into one of the top programs in college basketball after taking over in 1980. Krzyzewski won five national championships, went to 12 Final Fours, won 12 ACC regular-season titles and 15 ACC tournament championships. He was inducted into the Naismith Memorial Basketball Hall of Fame in 2001 and the College Basketball Hall of Fame in 2006. Krzyzewski led Team USA to gold medals at three Olympic Games and two FIBA World Championships.

That’s the résumé of the man Scheyer is expected to replace following the 2021-22 college basketball season.

So who is Jon Scheyer, the 33-year-old Illinois native hand-picked to lead one of the bluest of blue blood programs?

Until now, Scheyer was known more for his on-court exploits than his coaching career. He is one of the top scorers in Illinois high school basketball history, winning a state championship at Glenbrook North High School as a junior in 2005 and earning Illinois Mr. Basketball honors in 2006. A five-star prospect and McDonald’s All American, Scheyer chose Duke over the likes of Illinois, Arizona and Wisconsin.

During his four years in Durham, Scheyer averaged 14.4 points and shot better than 38% from 3-point range. He led Duke to a national championship in 2010 after earning All-America and first-team All-ACC honors as a senior.

“I think it was an important step for Duke to get to the Final Four and win a national championship,” Scheyer told ESPN in 2020, on the subject of the 2010 title. “It had been a few years. And we did it a different way. They could see us grow together, and it put us in a position the following year. Nolan [Smith], Kyle [Singler] back, Kyrie [Irving] coming in. It was huge. I think about myself even. I work at Duke now, clearly, every day I’m in Cameron. I can’t imagine being in there and not seeing the 2010 banner. I wouldn’t look back on my career the same exact way. That’s just the reality.”

Scheyer didn’t land a roster spot in the NBA, but played for two seasons overseas for Maccabi Tel Aviv in Israel and Gran Canaria in Spain.

He returned to Durham in 2013 as a special assistant, before being promoted a year later to assistant coach and then associate head coach along with Nate James in 2018. (James became the head coach at Austin Peay this offseason.)

“What a great addition to the Duke Basketball staff!” Krzyzewski said in a statement when he first hired Scheyer in 2013. “Jon Scheyer is one of the amazing champions we’ve had in this program and he’s certainly one of the greatest young men to ever wear the Duke uniform. He’s universally loved by Duke fans. It is incredibly exciting to be part of his journey to become a coach. Jon will add all the things he brought to Duke as a player, this time as a member of our staff. We are so proud that Jon is joining us at Duke.”

Scheyer’s stock has continued to rise as a coach since he joined the Duke bench. Early on, he was credited with his development of Duke’s guards, namely Tyus Jones and Luke Kennard. Following the departure of Jeff Capel to Pittsburgh, Scheyer took on a bigger recruiting role and was the lead recruiter for the likes of Jayson Tatum and Zion Williamson.

He was linked to a couple of vacant head-coaching jobs this past carousel, but ultimately returned to Duke for a fourth season as Krzyzewski’s associate head coach.

It turned out to be the best decision he could make.

In 10 months, Scheyer will likely be the head coach of Duke men’s basketball.