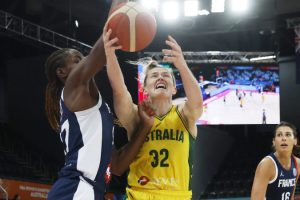 Sami Whitcomb has been made to wait for a chance to take her place in the Australian Opals and her time has arrived at this year’s FIBA Women’s World Cup.

The American-born guard chose to make Australia her home after taking up a deal to play in Perth in 2013 and then making a life in Western Australia with her wife Kate and their son Nash. 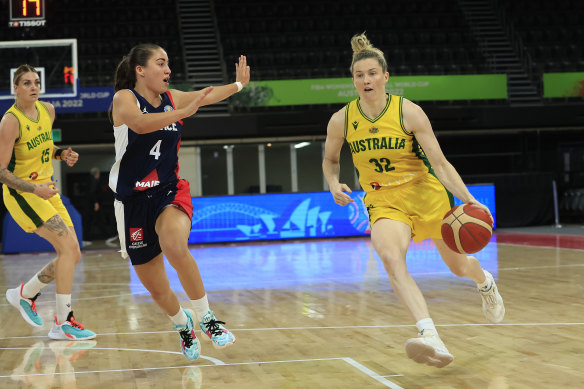 Opals guard Sami Whitcomb has a big role to play at the FIBA Women’s World Cup in Sydney.Credit:Getty Images

But despite starring in the WNBL and turning her form with Perth Lynx into a WNBA career with Seattle Storm and now the New York Liberty, Whitcomb’s starts with the Opals were limited.

That was because coach Sandy Brondello had to choose between established point guard Leilani Mitchell and Whitcomb due to both players being considered naturalised players despite the American-born Mitchell’s mother being born and raised in Australia.

Whitcomb was able to play at the 2018 FIBA Women’s World Cup when Mitchell was injured and she performed admirably.

Whitcomb never held it against Mitchell as they both knew only one naturalised player can play in a national team but with Mitchell having daughter Elle earlier this year, Whitcomb’s chance arose.

She will play at both guard positions during over the next 10 days, starting with Thursday night’s opener against France.

“It was difficult [to miss out] but it wasn’t as hard as it would have been with another player as Lei is incredible and so valuable and poised in her role as a point guard,” Whitcomb said.

“It was more disappointing that we didn’t get to play together because that would have been pretty fun.”

‘It’s trying to find a way to make sure everyone is feeling seen, heard and valued’

Whitcomb has loved being a part of the World Cup lead-up since the WNBA season finished, and she has seen the team’s chemistry transform since their disappointing exit from the Tokyo Olympics.

“I love this group, not just the 12 that have been selected but all the players involved in the lead-up,” Whitcomb said.

“We have all worked really, really hard to break down walls and be more vulnerable talking about the things that don’t work or haven’t worked or that have been problematic in the past and really just trying to find a way to move forward and be the best that we can be.

“We all want to be great, but we all will do what is best for the group – it’s trying to find a way to make sure everyone is feeling seen, heard and valued. I think that has been a big area of improvement.”

Whitcomb can’t wait to experience the home support that will come in Sydney.

“I wasn’t born and raised here [Australia] but it’s my chosen home, it’s where I’ve felt most at home after travelling around,” Whitcomb said.

“It’s where I’ve built my family. Australia embraced me in the same way, and I’m not different to anyone else on the Opals.

“Playing a home World Cup, it is so special as so, so few players get to experience this in their lifetimes.”