Sydney coach Chase Buford has told his team they should be “embarrassed” after his Kings gave up a 10-point lead against the bottom-placed Breakers on Sunday afternoon to hand the New Zealand side their second win of the season.

The Breakers failed to lead through the first three-quarters of the match but took advantage of a major fourth-quarter collapse from the Kings and finished the game on an 18-1 run to claiming the boilover result at Qudos Bank Arena 82-75.

Losing the final quarter 30-18, the late-game collapse has become a pattern for the Kings in recent weeks with Buford adamant the issue could be fixed. The Kings have won just one of eight final quarters this year.

“I’ll raise my hand, that’s on me,” he said about the problem.

“It’s something we’ve got to work on. It has cost us in three or four of our losses so far. We have to make quick decisions with the basketball, we can’t get sticky and hesitant with the game of the line.”

The Breakers managed just 30 points in the first half before catching fire in the second. The win is a major confidence boost for the New Zealanders, who have been forced to remain in Australia due to the current COVID-19 situation.

The loss is the third straight defeat for the eighth-placed Kings.

“We should be embarrassed by the way we finished the game. It’s as simple as that,” Buford said.

“It’s got to hurt because that’s not good enough.” 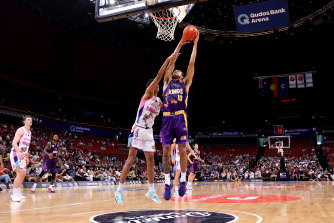 The Sydney Kings managed to give up a ten point lead with just five minutes remaining in the game.Credit:Getty

Breakers star Finn Delany led the way for the visitors with 21 points and nine rebounds.

“We’ve had guys in and out, and we continue to build chemistry on the floor. We know we have to stay patient, keep working and get better.”

The Kings are now in a dire spot mid-season with major concerns over their shooting ability.

Star recruit RJ Hunter went down in Sydney’s second loss of the season to the Illawarra Hawks and has been ruled out for the rest of the season due to the knee injury.

The Kings will face back to back games against the Brisbane Bullet in their next two clashes.