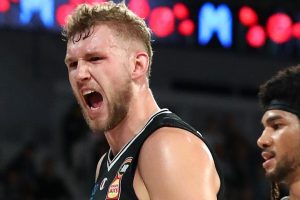 Melbourne United players and officials are “overjoyed” that 5000 fans will have the opportunity to watch the franchise potentially seal its sixth NBL championship against Perth on Friday.

With Melbourne holding a 2-0 lead over the Wildcats in the best-of-five series, the extra fans will give United a major boost after spending large chunks of the season on the road due to the coronavirus pandemic.

As a result, Friday will also mark United’s first home game since losing to the South East Melbourne Phoenix on May 16.

Melbourne United has been on the road for most of the NBL season due to the coronavirus pandemic. Picture: Paul Kane / Getty ImagesSource:Getty Images

This long stretch away from home has Crivelli and his team at United pumped to perform strongly in front of the franchise’s loyal fans.

“We are overjoyed at the announcement by the Victorian Government, which will allow 5,000 fans into the club’s remaining grand final games at John Cain Arena,” Crivelli said.

“By finishing the regular season atop of the NBL ladder, our team won the right to home court advantage in the finals. Due to the most recent lockdown, we have had to play all five our finals games so far interstate, so we are really pleased to finally be able to play a finals game in front of our fans, in our home stadium.

“Melbourne fans have been doing it tough over the past 18 months, and this most recent lockdown has been no exception. Hopefully, they can get to the game of Friday night and witness Melbourne United attempt to claim a second championship.”

United takes on Perth at John Cain Arena in Game Three of the NBL grand final series from 7:30pm on Friday.