Melbourne United are banking on their big-game experience to finish the regular NBL season with a bang and secure a hotly-contested finals berth.

United have played in the last two grand final series, and after a patchy season are hoping their class shines through, with two must-win games this week.

They are locked in a three-way tussle with Brisbane and New Zealand Breakers to secure the fourth and final post-season position. 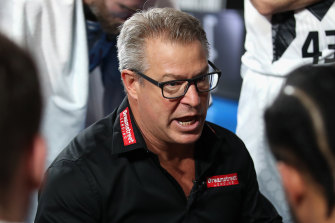 They host third-placed Cairns on Thursday night and then meet South East Melbourne at Melbourne Arena on Sunday afternoon.

United realistically need two wins, and one by a healthy margin, to nail the spot.

"You enjoy it a bit – win or go home – so there's a lot of edge about our practice but the guys are also pretty relaxed as well," Vickerman said on Wednesday.

"There's a confidence there that if we play the right way we can get the win.

"Chris (Goulding) and Dave Barlow are the most experienced but there's a lot of other guys who have been through finals either with New Zealand or us so that experience counts.

"Knowing those guys have risen to the occasion before gives you great confidence in those guys."

United have lost to Cairns three times this season but Vickerman said there was no mental block.

There was, however, added motivation after the unheralded Taipans upset Melbourne last February which tipped them out of top spot ahead of the finals.

"We lost to Cairns last year to knock us off top spot and for some of us, that still hurts," he said.

"To knock us out of the playoffs, we just can't let that happen."

Although Cairns have already locked in a finals spot, Vickerman didn't expect the Taipans to change their approach and will use the game to prepare for the finals.

"(Coach) Mike Kelly will be already be preparing for a playoff game, believing that the desperation that we will bring will be what they see in the playoffs.

"So I expect nothing less from them than anything they've got."

The Sydney Kings wrapped up the minor premiership last weekend, while the Perth Wildcats cemented second place after beating Brisbane, the defending champions making the finals for the 34th consecutive season.