Home » Basketball » United chase percentage, luck with finals destiny out of their hands

United chase percentage, luck with finals destiny out of their hands

Melbourne United needs wins, points and luck to have any chance of sneaking into the NBL semi-finals.

Sadly for them, it's been a season which has lacked consistency and they will require a dramatic form reversal in the final three games to feature in the post-season. 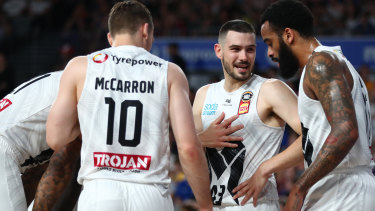 United (12-13) host bottom side Illawarra (5-21) at Melbourne Arena on Saturday and they not only need a win but a big one as passing Brisbane and New Zealand for fourth place will require a superior percentage.

The Bullets (14-11) and Breakers (13-13) play on Friday night in Brisbane and a Brisbane win would almost knock out Melbourne's hopes as they would go to 15 wins.

That number is the maximum wins Melbourne and New Zealand can get to and with Sydney, Perth and Cairns already on 15 wins or more, it would require some big results to pass the Bullets.

"It's just [a case of] win and try to win by as big of a margin as we can – it's the only possible way we can make the finals," Vickerman said.

"We need to be finishing possessions, doing the fundamental things and playing at a pretty high tempo to try and lift the scores up so I have to be aware to move people in and out quickly.

"We just have to go for it. We will be going for the win and to win by as much as we can.

"It's out of our control but we can control finishing the year the right way with three games in our arena."

If Brisbane lose to New Zealand, that will keep the finals race open heading into the final round as the Bullets play the second-placed Wildcats in Perth on Sunday then third-placed Cairns in Brisbane next Saturday.

Both those games could be losses although, even if that happens, Melbourne may also need South East Melbourne Phoenix to cause an upset and beat the Breakers in New Zealand next Friday night to knock them out of contention.

Vickerman also plans to again bring import guard Melo Trimble off the bench after he had a season-high 36 points last round.

Mitch McCarron is expected to start at point guard.

"Melo had his best game of the year so we will probably go back and look at that one again and also move a couple of people around," Vickerman said.

Phoenix star Mitch Creek was fined $500 ahead of his club's return to Melbourne Arena when they take on the Sydney Kings on Sunday.

The NBL fined Creek, who played nine seasons with Adelaide, for comments directed at 36ers owner Grant Kelley after the Phoenix's loss to Adelaide last round.

"I'm aware that my actions against the 36ers were unprofessional," Creek said in a statement.

"I apologise and take full responsibility for my behaviour."