Texas leaps to No. 4; Gonzaga still tops in poll 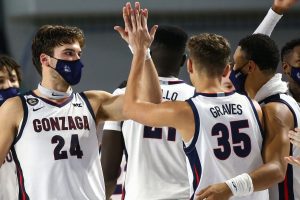 Gonzaga and Baylor remained atop The Associated Press men’s college basketball poll, while fourth-ranked Texas climbed to its highest perch in nearly a decade.

Mark Few’s Bulldogs earned 63 of 64 first-place votes in Monday’s latest Top 25, while Scott Drew’s Bears earned the other vote. Gonzaga and Baylor have been 1-2 at the top in all seven polls this season.

Villanova climbed one spot to No. 3, followed by the Longhorns, who jumped four spots after handing Kansas a lopsided weekend home loss. That marked the program’s highest ranking under sixth-year coach Shaka Smart and its first top-five ranking since February 2011.

Iowa, Kansas, Creighton, Wisconsin, Tennessee and Michigan rounded out the top 10, with the Wolverines climbing six spots for the biggest jump of the week. No. 11 Houston and No. 14 West Virginia slid out of that top tier from last week.

No. 19 Clemson was back in the poll for the second time this season, while the other new addition was Saint Louis. The Billikens, tied with Michigan State at No. 23, made their first AP Top 25 appearance since the 2013-14 season.

Northwestern and Ohio State fell out of the poll.