Melbourne: The Southside Flyers have opened their WNBL finals campaign with a 68-65 comeback victory over the Adelaide Lightning. 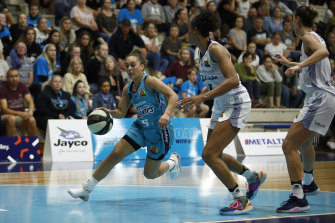 Leilani Mitchell of the Flyers drives to the basket under pressure from the Lightning’s Brianna Turner at Dandenong Stadium on Tuesday night.Credit:Getty Images

The minor premiers recovered from a slow start to surge home on Tuesday night at Dandenong Stadium and take a 1-0 lead in their best-of-three semi-final series.

WNBL defensive player of the year Mercedes Russell was a dominant figure for the Flyers with 20 points and 19 rebounds as they took a major step towards qualifying for the championship round.

The rebranded Dandenong-based franchise finished the regular season on top of the ladder with a 17-4 record but found themselves in trouble in their first playoff appearance as the visitors built a 13-point first-quarter lead.

But with Russell anchoring the defence, Southside held the Lightning to 14 points in the second term then powered to the front courtesy of a dominant 22-7 third-quarter effort.

Adelaide duo Lauren Nicholson (14) and Steph Talbot (13) combined for 25 points in the first half and Brianna Turner added 11 points, nine rebounds and five blocks but Adelaide's offence struggled after half-time as the Flyers pulled away.

Southside found themselves under pressure early as Adelaide punished a series of turnovers as part of an 11-0 run, Talbot and Nicholson impacting the game at both ends of the floor.

A late run of points helped Southside reduce Adelaide's quarter-time advantage to 25-17, but the Lightning withstood the challenge to re-establish a 13-point edge.

But the momentum turned once the Flyers found their outside shooting touch with Mitchell, Cole and Kiera Rowe all draining triples to cut Adelaide's half-time lead to 39-34.

Southside then took control from the start of the second half, a pair of baskets from Russell allowing Cole to send the Flyers into the lead.

The Lightning tried to keep pace, but Southside kept finding ways to score as they closed the third quarter with a handy 56-46 lead.

The Lightning will aim to send the series to a deciding third game when they host the Flyers in game two on Saturday.