James Harden scored 60 points to reach the mark for the fourth time in his career as the Houston Rockets steamrolled the visiting Atlanta Hawks 158-111 on Saturday night.

Harden made 16 of 24 field-goal attempts, including 8 of 14 from 3-point range, and connected on 20 of 23 free-throw attempts. He played just 31 minutes due to the one-sided contest and fell one point shy of his career high of 61, accomplished twice. 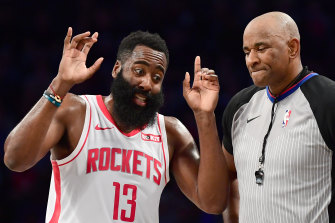 James Harden is averaging a league-leading 37.7 points per game this seasonCredit:Getty Images

"That's a great list right there. Those guys are something that I'm trying to get to," Harden said in a postgame television interview. "Hopefully when it is all said and done, I can be mentioned in that group forever."

Harden, who also had eight assists, became the fourth player to score 50 or more points on 20 occasions, trailing Chamberlain (118), Jordan (31) and Bryant (25).

Trae Young scored 37 points for the Hawks, who lost their 10th consecutive game. Young made five 3-pointers and had seven assists while following up the career-high-tying 49 he scored against the Indiana Pacers on Friday.

The 158 points were only Houston's second most this season. The Rockets beat the Washington Wizards 159-158 on Oct. 30.

Harden scored 13 points in the first quarter, 18 in the second and 29 in the third.

The Rockets were feeding him the ball often in the latter stages of the third quarter, and he was fouled by Evan Turner with 11.5 seconds left despite firing a 30-foot 3-point attempt. Harden made all three free throws to hit 60.

Harden then headed to the bench with the Rockets comfortably ahead 127-73 at the end of the stanza.

Atlanta was tired from the outset on the second end of a road back-to-back. De'Andre Hunter scored 14 points for the Hawks, who shot 42.7 percent from the field and were 15 of 46 from 3-point range.