South East Melbourne Phoenix have called in a reinforcement as they have no "precise" idea of when star import Tai Wesley will return from a hamstring injury.

The undefeated Phoenix have signed 201-centimetre forward Jeffrey "Jaye" Crockett as an injury replacement and he will stay with the team until Wesley is fit to return.

The 27-year-old American has played in Europe for several years, more recently in Lebanon, and the club expects he will be uniform to face Illawarra Hawks at Melbourne Arena on Saturday night.

Phoenix coach Simon Mitchell said Crockett would bring energy and athleticism to the side.

"Jaye has got unbelievable speed and his engine just stood out immediately," Mitchell said. 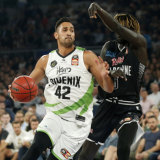 Tai Wesley, pictured in round one, is recovering from injury. Credit:Getty Images

"He's that guy who plays hard on every possession. People see this guy play and he's at the next level in terms of ferocity and intensity.

"We felt that, alongside Mitch Creek at that four spot [power forward], he would be an incredible complement to what we're trying to do.

"I think the fans will absolutely adore him. He brings an element of athleticism to our front line that we haven't had previously.

"He's going to up the excitement metre for us and I think people are going to really enjoy the way he plays the game because he does it the right way."

"That helped us in regards to verifying what kind of person Jaye is," Mitchell said.

"We have a lot of trust in John and he was extremely complimentary of Jaye's personal attributes, which are very important to us."

Mitchell told media after Sunday's win over the Brisbane Bullets that Wesley wouldn't be back any time soon and Phoenix general manager Tommy Greer said he expected Crockett to fit well in the team's system.

"Tai is irreplaceable, but we're excited to be able to find a player of Jaye Crockett's calibre to come in and fill the gap while Tai is out," Greer said.

"Jaye is a high energy guy, who can play in any system. We believe he'll fit seamlessly into the Phoenix culture."

The Phoenix host Illawarra Hawks at Melbourne Arena on Saturday at 8pm.

Merson Says: Edinson Cavani a no brainer for Chelsea

Manchester United and Sporting Lisbon 'to settle on Ferndnades fee'