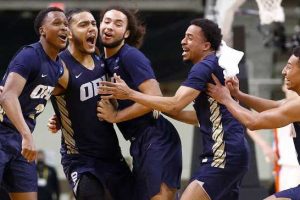 INDIANAPOLIS — Oral Roberts pulled off yet another upset to become just the second No. 15 seed in NCAA tournament history to advance to the round of 16 with an 81-78 victory over Florida on Sunday night.

Kevin Obanor and Max Abams carried the Golden Eagles out of an 11-point deficit to knock off the seventh-seeded Gators. Oral Roberts, which opened the tournament with a stunning upset over No. 2 seed Ohio State, will next try to knock off No. 3 seed Arkansas next weekend.

Obanor scored 28 points and Abmas, the regular season national leading scorer, finished with 26 as the Golden Eagles (18-10) closed the game on a 25-11 run to overcome the 11-point lead Florida held with less than 10 minutes remaining.

Oral Roberts joins Florida Gulf Coast — those guys from Dunk City — as the only No. 15 seeds to reach the round of 16 in tournament history.

The Oral Roberts fans inside Indiana Famers Coliseum chanted “Cinderella” during a wild celebration after the victory.

The chance to reach the Sweet 16 was a message hammered home by coach Paul Mills after the opening round victory over Ohio State. If they enjoyed beating the Buckeyes, Mills said, a week reveling in moving onto the next round would be even better.

They’ll get that chance.

Oral Roberts took a 77-76 lead — its first lead since late in the first half — on Obanor’s basket with less than 3 minutes remaining. Noah Locke answered for the Gators, but DeShang Weaver, who missed his first five shots, hit an open 3-pointer for an 80-78 lead with 2:08 remaining.

Florida had chance but failed to get good shots on its final few possessions. The Gators had a pair of turnovers, Locke missed a corner 3-pointer and after Obanor split free throws, difficult 3-point attempts by Tre Mann and Scottie Lewis were off line.

Mann led the Gators (15-10) with 19 points, but went quiet late in the second half, failing to score over the final 17 minutes.

Locke finished with 17 points and Colin Castleton and Tyree Appleby both added 14 for the Gators. But there will be plenty of anger and frustration after losing in the second round for the third straight NCAA appearance and a game Florida will felt it gave away.

The Gators shot 55 percent. They outrebounded the smaller Golden Eagles 37-24 and had 42 points in the paint. But Florida committed 20 turnovers and had just three made baskets over the final 9½ minutes.

In the eight previous instances of a No. 15 seed playing in the round of 32, only Florida Gulf Coast was able to keep its magical run going. “Dunk City” ousted San Diego State in the second round before losing to Florida in the Sweet 16.

Most times, the elation of pulling off the first-round upset led to a second-round rout. Only Coppin State in 1997 lost by less than 10 points, an 82-81 defeat to Texas.