Australian Opals captain Jenna O'Hea will miss her side's Olympic qualifiers next month and the rest of the WNBL season, but she should be fit in time for the Tokyo Olympics.

O'Hea landed awkwardly on her wrist while helping her Southside Flyers to an overtime win over the Melbourne Boomers in the WNBL on Sunday and she played through pain to finish the game. 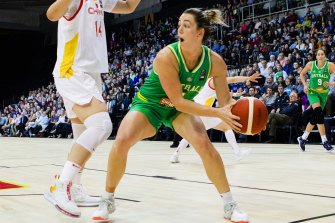 But scans revealed she has broken her wrist and will need surgery, which should keep her out for 10-12 weeks.

Southside Flyers teammate Sara Blicavs will be added to the Opals roster in her place.

The Opals play in a four-team Olympic qualifying tournament in France from February 6-10, from which three teams will qualify. The world No.2 Opals should still qualify comfortably for Tokyo despite their captain's absence, but will miss O'Hea's playmaking and finishing along with her leadership.

"Not going to the Olympic qualifying tournament is disappointing and, of course, missing the remainder of the season for Southside Flyers," O'Hea said.

"But my Opals teammates know that I will be watching and cheering them on, we are focused on Tokyo but there are games to win in France as a first step."

Opals doctor Greg MacLeod said O'Hea should be fully able to play again by 12 weeks, which keeps her in the frame for Olympic selection as long as the Opals handle business in France.

Opals coach Sandy Brondello said her side had to cover for O'Hea until she is match fit again.

"We will definitely miss her talent and leadership, however it offers all her Opal teammates a chance to step up and collectively absorb what her presence would normally deliver," Brondello said.

The Flyers remain on top of the WNBL ladder but assumed favouritism in large part because of O'Hea's exceptional play. Her absence opens up the entire title race although the Flyers still have plenty of match-winners.

There are three rounds left in the season and the Flyers, Melbourne Boomers, Canberra Capitals and Adelaide Lightning will likely form the top four.