No. 4 transfer Scheierman commits to Creighton 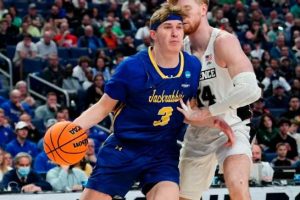 Scheierman, a Nebraska native, chose the Bluejays over Nebraska, Clemson, Arkansas and Duke.

“I decided to commit to Creighton because I really like how they play,” Scheierman told ESPN. “They are an unselfish team who really share the ball and that’s what I’m used to and I enjoy playing that way. They also let their guys play free and loose and I feel like I play my best in that type of system.

“They have a great group of guys coming back that are very talented and know how to play the right way and I think us together can do something special. Also, the opportunity to come home was an offer I couldn’t resist.”

The Bluejays were ranked No. 9 in ESPN’s initial Way-Too-Early preseason top 25, but the addition of Scheierman, who is ranked No. 4 in ESPN’s transfer rankings, gives them an elite scorer and pushes them into the top five.

“They said I’m that missing piece that can take them to a national championship — and better yet, I can do it at home,” Scheierman said.

A versatile 6-foot-6 wing, Scheierman won Summit League Player of the Year honors this past season after averaging 16.2 points, 7.8 rebounds and 4.5 assists, while shooting 46.9% from 3-point range. Over the course of the season, he tallied 12 double-doubles, including a 26-point, 11-rebound, six-assist performance against Omaha in January.

Scheierman helped lead the Jackrabbits to a 30-4 record, including an 18-0 Summit League mark, before losing in the first round of the NCAA tournament to Providence. He had 18 points and 10 rebounds in the loss to the Friars.

It was his second straight season earning a first-team all-conference selection, as he was picked in 2020-21 after averaging 15.4 points, 9.2 rebounds and 4.0 assists.

One of the best NBA draft prospects in the portal, Scheierman is still testing the NBA draft waters and is invited to the G League Elite Camp on May 16-17.

“There isn’t a number I had in mind,” Scheierman said. “I think if I can get drafted and it’s guaranteed money then I will stay.”

What makes Scheierman such an interesting prospect is his offensive versatility. He can play the point guard spot because he’s an elite passer, but he’s also terrific off the ball because of his shooting ability. Plus, he rebounds like a power forward.

Creighton should fit Scheierman well because it will help him defensively. He can guard whichever forward Arthur Kaluma isn’t defending, and he will have Big East Defensive Player of the Year Ryan Kalkbrenner behind him to protect the rim.

For Scheierman, more than any NIL package, proving that his production can carry over against the highest level of competition was key in his decision to pick Creighton. He played the power forward spot in the Summit League for an up-tempo team, which allowed him to showcase his entire skillset, but left NBA teams wondering how it translates.

“It’s actually funny because there was information getting out that like, I was demanding this and that,” Scheierman said. “In all reality, I knew NIL was gonna be a part of it, but I told my parents at the beginning of the process that if I’m going back to school, I’m doing this to ultimately put myself in a better position for my pro aspirations.”

Scheierman will join four players who started at least 13 games for Creighton last season. Ryan Nembhard was one of the best freshman point guards in the country, while fellow freshman Trey Alexander came on strong down the stretch of the season, averaging 16.0 points and 7.0 assists in two NCAA tournament games. Kalkbrenner and Kaluma will anchor the frontcourt.

Jonathan Givony is an NBA Draft expert and the founder and co-owner of DraftExpress.com, a private scouting and analytics service utilized by NBA, NCAA and International teams.