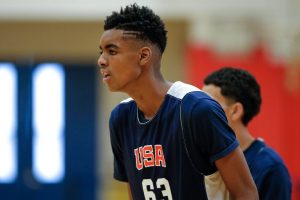 Emoni Bates, the No. 1 prospect in high school basketball, is reclassifying into the 2021 class and could potentially enroll in college for the upcoming season.

Bates announced on Instagram he’s down to four options: Michigan State, where he decommitted from in the spring, Oregon, Memphis and the G League.

Bates, a 6-foot-9 small forward from Ypsilanti, Michigan, originally committed to Michigan State last summer before reopening his recruitment in April. Before his commitment to the Spartans, Tom Izzo’s program had been the only one consistently recruiting him. Since his decommitment, however, a number of schools jumped into the mix.

Bates cut his list to eight options in July, also including Miami, Baylor, Overtime Elite and the NBL in Australia. Only four options remain now.

Bates doesn’t turn 18 until January, so he is too young to enter the 2022 NBA draft. Draft rules state a prospect must be a year removed from his high school graduating class and turn 19 in that calendar year in order to go into the draft; Bates won’t turn 19 until January 2023. As a result, he could end up playing college basketball for two years, or go to college for one year and then play in the G League or elsewhere for a year before entering the 2023 draft.

After an inconsistent high school season at Ypsi Prep (Michigan), Bates performed well with the Team Final grassroots program during the spring and then re-established himself as one of the elite scorers in high school basketball with Bates Fundamental on the Nike EYBL circuit in July. He averaged 20.0 points in nine games, including a 33-point performance.

Bates also had a 35-point effort in late July in the consolation bracket of the Nike Peach Jam in late July, shooting 13-for-24 from the field and finishing with six rebounds and three assists.

Jalen Duren, the No. 2 prospect in 2022, is also strongly considering a reclassification into 2021. Duren is expected to make his decision on Friday, and he’s down to Memphis, Miami, Kentucky, the G League and NBL.