With the NBL season set to tip off on Thursday night, basketball writer Roy Ward runs his eye over all nine teams. 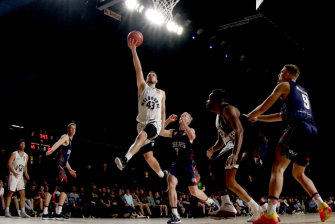 Chris Goulding of United drives to the basket in a pre-season match against the Sixers.Credit:AAP

Reasons to watch: Goulding's shooting, Long's dunks, Trimble's speed and Prather's everything. If they bring all those talents together, they will be appointment viewing.

How they can win it: Defence and rebounds. Melbourne put a premium on recruiting length and defensive nous this off-season. Ili, Long, Lual-Acuil and Prather can all make an impact at that end and on the boards.

How they can miss finals: There is a lot of firepower on this roster and some of them won't fire as often as they will want. If Melbourne lose too many games or players don't accept their roles it could get ugly. But Vickerman is a title-winning coach and leaders like Barlow and Goulding are unlikely to let that happen.

Predicted finish: 1st. It's as ever, but Melbourne's established core and the players they've brought in look a cut above the rest.

Reasons to watch: Bogut and Ware are MVP calibre stars and will be stellar again but the show-stealer is Brazilian guard Louzada who is spending the season here to learn English and prepare to join New Orleans Pelicans. He's NBA ready and dominated pre-season.

How they can win it: Bogut is a the key to the Kings with his defensive talents and passing skills but Ware, Lisch, Louzada and Kickert all need to fire. Watch for Tate as well. He's unconventional but explosive around the basket.

How they can miss finals: If they don't defend, if Bogut gets hurt or if Weaver's style takes time to pick-up, the Kings could find themselves too far behind.

Predicted finish: 2nd. The Kings are good enough to win it all but they may lack the cohesion of Melbourne or Perth. 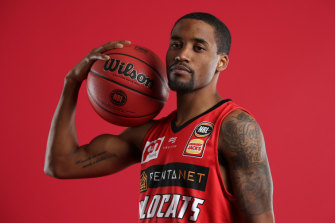 Bryce Cotton is capable of having a huge impact for the defending champions.Credit:Getty Images

Reasons to watch: Cotton is a threat to break a game open while White dominated the NBL grand final and could be even better. Kay is ready for an MVP calibre season too.

How they can win it: Cotton and White dominate, Kay does what he does, Hunt surprises and Martin, Norton, Steindl and co all find a new level of play. Everyone has to rebound.

How they can miss finals: Perth has lost a lot of toughness recently with Matt Knight, Angus Brandt, Greg Hire and Shawn Redhage moving on. They were all elite rebounders, others must fill the breach.

Predicted finish: 3rd. Perth could potentially go back-to-back but the hard edge that won them titles may not be there.

Reasons to watch: Sobey could be a game-changer with his drives and dunks, especially if Patterson drags away defensive attention. Gliddon is a proven performer, Braun is underrated.

How they can win it: The Bullets have an experienced core and they want to play a deliberate team-first style. Braun looks a perfect fit while Patterson needs to continue his All-NBL form.

How they can miss finals: If Patterson struggles, the Bullets could slide. They also need Vukona on court. If injuries hit him again it will show.

Predicted finish: 4th. It's feast or famine. Fit and firing, the Bullets could win it all but injured and out of form, they could drop to last. 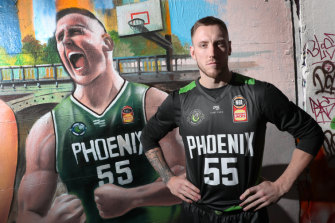 Reasons to watch: Roberson can shoot with the best, Armstrong is an NBA-calibre dunker, Adnam makes things happen and Creek plays with so much drive he draws every eye to him.

How they can win it: History teaches us expansion teams usually struggle but this group knows how to grind out NBL wins. Wesley and Creek will impose themselves inside, Roberson, Madgen, Adnam and Stephens will fire off three-pointers. Everyone will defend and scrap.

How they can miss finals: Injuries are their biggest threat. Wesley and Gibson have already had injury scares while Roberson is a veteran import. If they have too many wounded bodies they will pay for it.

Predicted finish: 5th. The Phoenix could end up in the top four but it might be too much to ask in their first season.

Reasons to watch: Ball could be the top pick in the 2020 NBA Draft but his free-shooting, free-scoring talents will be at Illawarra this season. The world will be watching, hopefully this country does too. NBA import Brooks is also a jet.

How they can win it: The Hawks are youthful and talented so if everyone is firing they could do anything. Froling is promising, so is Glover while Blanchfield, Brooks, Ball and others all must bring out their best.

How they can miss finals: If they play like a young side they will be inconsistent and drop too many games to make the top four. If Ball or Brooks drop out, the Hawks would struggle to replace them.

Predicted finish: 6th. The Hawks could be the most talented bottom-side ever or a championship darling. We've never seen an NBL under this kind of spotlight.

Reasons to watch: Randle is a crowd pleaser and makes every game a must-watch while Froling is a potential NBA signing and Griffin is known for his dunking.

How they can win it: The Sixers looked off the pace before Randle arrived. He will bring points and excitement. But they need their whole team running and gunning to win.

How they can miss finals: Tipping against a Wright side is often a no-no but even with Randle they appear a star short of being a contender. They could still sign another gun. Right now, it looks unlikely.

Predicted finish: 7th. As it stands, the Sixers don't appear finals bound but they have proved doubters wrong before.

Reasons to watch: Teenager Hampton is a tear-away athlete, dunk threat and defensive presence while import Scotty Hopson might be the best one-on-one player in the NBL. He is world class.

How they can win it: There are two New Zealand Breakers. One has NBA-level athletes like Hampton and Hopson terrorising defensively while running precise offence. The other Breakers lose that defensive drive and go one-on-one offensively. Whichever line-up turns up decides if they make it or not.

How they can miss finals: If the Breakers don't play together they lose. If last-minute signing Ashley struggles or their injury woes continue they will fall.

Predicted finish: 8th. There appears to have been too much change for success this time but they have the talent to prove this wrong.

Reason to watch: There is NBA buzz about Australian rookie Noi who is super athletic and can score in bunches while Jawai is a beast and Djeric is an x-factor.

How they can win it: The Taipans don't have a huge budget but they have signed wisely. If their shots are falling and someone stands up as their late-game closer they could cause a shock.

How they can miss finals: Last season the Orange Army fell short in the final minutes too many times. Some of it was bad luck, some bad execution. If this repeats they miss out.

Predicted finish: 9th. They look two players short, but if Noi, Machado and Oliver all have All-NBL calibre seasons they will make this prediction look silly.