Tobias Harris scored over 20 points for the 13th time this season with his game- high tally of 31, while Joel Embiid hit 24 points and grabbed 11 rebounds.

The Sixers’ fifth win in a row saw them improve to 20-7 and 14-0 at home in what is their longest winning streak on their own court to open a season since their 22 in the championship season of 1966-67. Brandon Ingram led the Pelicans with 17 of his 32 points in the fourth quarter, but they dropped their 11th consecutive game. 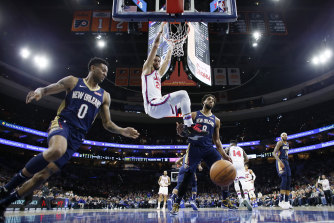 Ben Simmons hangs from the rim after a dunk past New Orleans Pelicans’ Nickeil Alexander-Walker and Jahlil Okafor. Credit:AP

Another Boomer in Joe Ingles had 13 points, four rebounds, eight assists and one steal in a 114-106 win for Utah Jazz over Golden State Warriors.

Bojan Bogdanovic scored 32 points and tied a franchise record with eight three-pointers while Donovan Mitchell had 28 points as the hosts (15-11) won their third game in four. 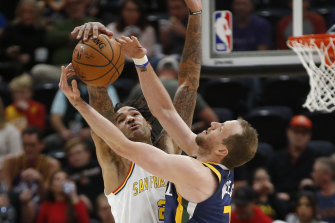 ‘‘He’s the MVP for a reason. We talked about in pre-game that he’ll take shots, and we’ll just live with the results. He did not miss tonight, period,’’ Magic guard Evan Fournier said.

LeBron James compiled 28 points, 12 assists and nine rebounds while leading the visiting Los Angeles Lakers to a 113-110 win over Miami Heat for their sixth consecutive victory.

‘‘Two teams that play physical, play together, play hard. That’s why they are where they are at this point in the season and that’s why we are where we are,’’ James said, comparing the match to a heavyweight fight.

Anthony Davis also starred with a game-high 33 points, 10 rebounds and three blocks for the Lakers (23-3), who earned their 13th consecutive road win. Jimmy Butler had a team-high 23 points but his Heat (18-7) lost at home for the first time this season.

Giannis Antetokounmpo returned from a one-game absence through injury to post 37 points and 11 rebounds, and the visiting Milwaukee Bucks rallied past Memphis Grizzlies 127-114 for their 17th consecutive win.

Milwaukee (23-3) now have the second-longest winning streak in franchise history – the record of 20 set during the team’s 1970-71 championship season. Khris Middleton added 26 points for the Bucks, while Jaren Jackson jnr scored a career-high 43 points for the Grizzlies.

Paul George had 46 points and Kawhi Leonard 42 and 11 rebounds as LA Clippers improved to 20-7 on the season with a 124-117 victory over Minnesota Timberwolves.

Devonte’ Graham scored a team-high 16 points, P.J. Washington recorded a double- double with 13 points and 10 assists, and Charlotte Hornets held on for a 83-73 win over Chicago Bulls.

Buddy Hield drained a game-high 34 points and dished off 12 assists but his Sacramento Kings fell at home 103-101 to New York Knicks.