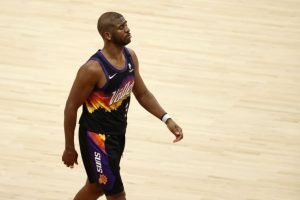 LOS ANGELES (AFP) – All-star point guard Chris Paul, who guided the Phoenix Suns to their first NBA Finals since 1993, has agreed to a new four-year deal with Phoenix worth up to US$120 million (S$162 million), US media reported Monday (Aug 2).

The 36-year-old Paul opted out of his contract by declining a US$44.2 million player option for next season, becoming an unrestricted free agent.

Contract agreements with free agents cannot become official until the start of the new NBA year on Friday.

Paul played through a string of injuries throughout the 2021 playoffs but was able to lead the Suns into finals, where they lost in six games to the Milwaukee Bucks.

Paul underwent wrist surgery but is expected to be back in time for the beginning of the 2021-22 NBA season, American broadcaster ESPN reported.

In other reported free agent moves Monday, Kyle Lowry, who spent nine years with the Toronto Raptors, is headed to the Miami Heat in a sign and trade deal.

The New Orleans Pelicans are set to trade guard Lonzo Ball to the Chicago Bulls for two players and a draft pick, said ESPN.

The 23-year-old restricted free agent, who began his career with the Los Angeles Lakers, is expected to sign a four-year, US$85 million contract in a sign-and-trade agreement.