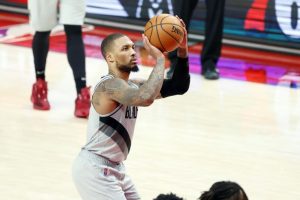 Lillard, who also had 10 assists, was fouled by Eric Bledsoe before making both attempts. New Orleans’ Zion Williamson saw his short bank shot bounce off the rim as time expired.

Gary Trent Jr. scored 22 points for Portland. Teammate CJ McCollum scored 10 points on 3-of-11 shooting in 26 minutes in his return from a fractured left foot. McCollum missed the previous 25 games.

Lillard’s winning free throws were set up by Nickell Alexander-Walker (20 points, six three-pointers) fumbling an inbounds pass out of bounds with 4.2 seconds left to give the Trail Blazers one last shot.

Lillard and Robert Covington sank three-pointers, Lillard drove for a layup and Trent added two free throws to cut the deficit to seven. Trent and Lillard added three-pointers as the Trail Blazers pulled within 117-116 with 2:41 left.

Bledsoe nailed a three-pointer with 2:20 left as New Orleans halted a drought of more than 3 1/2 minutes. Williamson added two baskets, the second giving the Pelicans a 124-121 lead with 41.4 seconds remaining.

Ingram missed two free throws with 7.2 seconds left before Lillard was fouled and made both free throws to bring Portland within one with 5.2 seconds remaining.

Josh Hart added 16 points and nine boards for New Orleans, who connected on 52.3 per cent of their shots and knocked down 16 of 33 from three-point range. The Pelicans made 16 of 20 foul shots.

The Trail Blazers shot 52.1 per cent from the field and were 18 of 43 from behind the arc.

The teams meet again on Thursday night (March 18) in Portland.

Portland trailed 64-50 at half-time but trimmed the deficit to seven on Lillard’s basket with 7:46 left in the third quarter.

New Orleans used a run of eight straight points on three-pointers by Hart and Ingram and an 11-foot shot by Steven Adams to push the margin to 17 with 1:45 remaining. The Pelicans led 95-82 entering the fourth quarter.