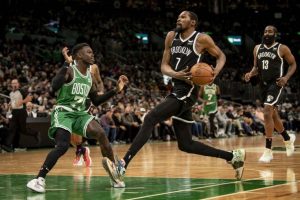 James Harden had 20 points, 11 assists and seven rebounds for the Nets, who have won four straight and seven of their past eight games.

Durant’s first basket, on a pull-up jumper at 10min 5sec of the opening quarter, moved him past Allen Iverson (24,368 points) into 25th place on the NBA’s all-time scoring list. Durant finished the night with 24,388 points.

LaMarcus Aldridge had 17 points and nine boards and Cam Thomas chipped in 13 points for Brooklyn.

Marcus Smart finished with 20 points and eight assists to pace the Celtics.

Boston’s leading scorer, Jayson Tatum, made just four of 16 shots to wind up with 15 points, and Dennis Schroder had just 10 points on three-of-10 shooting.

Celtics All-Star Jaylen Brown scored 13 points after being a game-time decision due to injury management. Brown had 19 points in Boston’s win over the Houston Rockets on Monday after missing eight games with a right hamstring strain.

Brooklyn led 62-49 at half-time and were up by as many as 29 points in the third quarter. Boston cut it to 12 early in the fourth, but the Nets scored the next five points.

Al Horford’s three-pointer at 10:26 of the first quarter tied the game at three before Durant’s jumper gave Brooklyn the lead for good.

Boston visit San Antonio on Friday night as they play seven of their next eight games away from home. Brooklyn open a four-game homestand against Phoenix on Saturday.