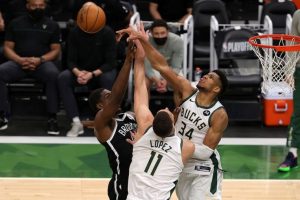 LOS ANGELES (AFP) – Giannis Antetokounmpo poured in 34 points and grabbed 12 rebounds as the Milwaukee Bucks evened their Eastern Conference second round series on Sunday (June 13) with a 107-96 rout of the Brooklyn Nets, who lost Kyrie Irving to an injury.

Antetokounmpo delivered his best performance of the postseason, shooting 14-of-26 from the field and scoring 12 points in the third quarter for the Bucks, who have won two straight at home to level the best-of-seven series at two games each.

“This says a lot,” Antetokounmpo said. “I am really proud of this team. We keep playing together. We put ourselves in a position to win two more games.”

Game Five is Tuesday in Brooklyn.

Khris Middleton chipped in 19 points as the Bucks made 44.3 percent of their shots and hit 16 threes in front of a pandemic-limited crowd of 16,000 at Fiserv Forum.

Their improved perimeter shooting comes after they had managed to make only 22 percent from three-point range in the first three games.

Antetokounmpo said their goal is to win at least one of the next two on the road. “We will try to get one from Brooklyn,” he said.

Kevin Durant finished with 28 points and 13 rebounds but the Nets struggled offensively after Irving exited the game in the second quarter and did not return.

Irving injured his right ankle with just over six minutes left in the first half after he stepped awkwardly on the foot of Antetokounmpo.

Initial X-rays were negative but Irving is expected to see team doctors again on Monday.

“I thought he got hit. When he went to locker room they said he sprained his ankle. But we got to keep focusing on ourselves,” Antetokounmpo said.

Irving scored 11 points on five of 11 shooting in 17 minutes before getting hurt. In the first eight games of the postseason, Irving averaged 24.1 points.

The Nets also lost the third game in the first round series against the Boston Celtics, but the Bucks are a more formidable opponent and it showed by cruising to victory in game four at home.