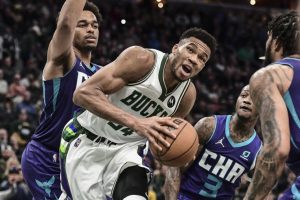 (REUTERS) – The Milwaukee Bucks battled back from an 18-point deficit and Giannis Antetokounmpo scored a go-ahead layup with two seconds left in regulation to beat the visiting Charlotte Hornets 127-125 on Wednesday night (Dec 1).

Milwaukee earned its eighth straight National Basketball Association win after outscoring the Hornets 67-57 in the second half to complete the comeback after not holding a lead through nearly 34 minutes of action.

Charlotte’s Miles Bridges threw up a heave at the buzzer, but it did not fall, handing the Bucks their sixth consecutive victory at home.

Antetokounmpo racked up 40 points, 12 rebounds and nine assists. Khris Middleton added 21 points for the Bucks. Charlotte’s LaMelo Ball tallied a career-high 36 points to go along with nine assists and five rebounds. Kelly Oubre Jr. finished with 25 points for the Hornets.

Over in Cleveland, Kevin Love scored a game-high 22 points off the bench as the Cavaliers broke a 20-game, decade-plus-long losing streak in games played in Miami, winning 111-85.

Miami’s Duncan Robinson shot 0-for-7 from the floor and went scoreless. That ended his 69-game streak with at least one three-pointer, which had been the second-longest active streak in the NBA. Prior to Wednesday, Cleveland’s most recent win in Miami was on Jan 25, 2010.

Tyler Herro returned from a two-game absence to lead the Heat with 21 points.

Orlando Magic’s Cole Anthony had 24 points, eight rebounds and seven assists in a successful return to the line-up and Franz Wagner hit a go-ahead triple with 1min 45sec left as hosts Orlando rallied to defeat Denver 108-103 and end a seven-game losing streak.

Wagner’s three-pointer gave the Magic their first lead of the game at 106-103.

Will Barton missed an off-balanced triple from the left wing, and Anthony sank two free throws after being fouled on the rebound to cap the scoring. Wagner finished with 15 points and was one of six Magic players to score in double figures.

Nikola Jokic had 18 points, 15 rebounds and seven assists for the Nuggets, and Aaron Gordon scored 17 points in his return to Orlando.

In Boston, Jayson Tatum had 26 points and a career-high 16 rebounds as hosts Celtics outlasted Philadelphia for its second straight win (88-87) and fifth in the last seven.

Seth Curry led the 76ers with 17 points. Shake Milton contributed 16 points off the bench while Boston-area native Georges Niang added 12 points for Philadelphia, which lost for the ninth time in 12 games.

Atlanta Hawks’s Trae Young scored 33 points, his fifth straight game with 30-plus, as the Hawks defeated Indiana Pacers 114-111 in Indianapolis.

The victory counts as coach Nate McMillan’s 700th career win, although he has self-quarantined because his son, assistant coach Jamelle McMillan, had a positive Covid-19 test earlier in the day. Indiana’s Malcolm Brogdon missed the potential tying shot from half court to end the game.

Young was 13-for-27 from the floor, including three three-pointers, and added 10 assists and eight rebounds. Kevin Huerter chipped in 19 points, and John Collins supplied 14 points and four blocks. Brogdon led Indiana with 27 points and nine assists, and Domantas Sabonis added 22 points and 10 rebounds. Myles Turner had 17 points, nine rebounds and two blocks.

The match between the Houston Rockets and Oklahoma City Thunder saw Jae’Sean Tate score a career-high 32 points to lead visiting Houston to a 114-110 victory over Oklahoma City.

The Rockets extended their winning streak to four immediately following a 15-game losing streak. The Thunder have lost seven consecutive games and nine of 10.

Tate scored 13 of his points in the fourth quarter, while Armoni Brooks had 10 of his 18 off the bench in the final frame as the Rockets outscored the Thunder 41-29 in the fourth. Houston’s comeback spoiled the big night for Oklahoma City’s Shai Gilgeous-Alexander, who scored a season-high 39 points on 12-of-26 shooting.

Over in Washington, Bradley Beal scored four consecutive points to key a late run and Montrezl Harrell capped a season-best, 27-point night with a pair of dunks as host Washington pulled away from Minnesota to win 115-107.

Beal finished with 19 points, Daniel Gafford 18 and Davis Bertans 15 for the Wizards, who won for the third time in their past four games after losing four of five.

Karl-Anthony Towns put up a 34-point, 10-rebound double-double for the Timberwolves, who lost for just the second time in their past nine games.

Dallas Mavericks’ Luka Doncic scored 18 of his game-high 28 points in the first quarter as visiting Dallas racked up a season high in points and dominated New Orleans, 139-107.

Kristaps Porzingis added 20 points and 10 rebounds, Jalen Brunson scored 17 points and Tim Hardaway Jr. had 16 as the Mavericks won for just the second time in seven games. They shot 68.7 percent from the floor, including 18 of 34 on three-pointers. Dallas used all 15 players, 13 of whom scored, and the bench totalled 72 points.

Brandon Ingram scored 29 points, Devonte’ Graham added 13, Nickeil Alexander-Walker scored 12 and Kira Lewis Jr. had 11 to lead the Pelicans, who entered the game having won three of their last four games in their best stretch of the season.

Sacramento continued to enjoy its visits to Los Angeles, winning for a second victory at Staples Centre in six days, this time convincingly (124-115).

De’Aaron Fox poured in a game-high 24 points, Terence Davis posted a season-best 23 and Davion Mitchell added 20 for the Kings, who came away with a 141-137, three-overtime win over the Lakers in a trip to Los Angeles last week.

Reserves Luke Kennard and Terance Mann had 19 points apiece while Ivica Zubac put up 17 for the Clippers, who lost their third straight. The Kings’ win over the Clippers was the fourth in the teams’ past five meetings in Los Angeles, whereas the Clippers have prevailed 15 straight times in Sacramento.