Shea Ili brought the desperation and Chris Goulding made the big shots as Melbourne United kept their finals hopes alive heading into the last day of the season.

United beat the finals bound Cairns Taipans 99-83 at Melbourne Arena on Thursday night to take themselves to 14 wins and keep their finals hopes in their own hands as 6315 fans made the noise of 10,300. 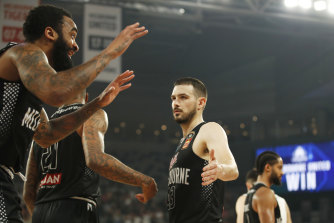 Chris Goulding celebrates with Stanton Kidd of United after their win on Thursday night.Credit:Getty Images

If South East Melbourne Phoenix beat New Zealand Breakers on Friday night and Cairns knock over Brisbane Bullets on Saturday then United will be all but into the finals pending a win over the Phoenix at Melbourne Arena on Sunday.

Even if the Breakers and Bullets score wins, Melbourne will know whether they just have to win on Sunday or win by a certain margin to make the finals via percentage.

Either way, fourth place will be in their own hands and that looked unthinkable just two weeks ago as they crashed to sixth place and the verge of elimination, if Brisbane or New Zealand had another win then United may never had this chance.

Melbourne coach Dean Vickerman said his side had a lot to do to make the finals and he could see them needing to win by a certain margin on Sunday.

"We are close, about 20 points up [on percentage] but I can certainly see New Zealand putting a possible margin like that up if they play the way they have been playing lately," Melbourne coach Dean Vickerman said.

In last week's win over Illawarra, Melbourne coach Dean Vickerman kept Ili on the bench after his first stint due to the New Zealand international playing the past month with a painful wrist injury.

Vickerman and Ili knew he would be needed to make plays in this game and he was a menace early with 12 points and some vital defensive plays from charges to chasing down lose balls.

Melbourne lost their first three clashes with Cairns this season and the Taipans showed why in parts of this game as former NBA centre Nathan Jawai dominated early with 16 points in 12 minutes while the Taipans kept the contest close no matter how often the home side went on a run.

But this time Melbourne took the win as Goulding (23 points) made some key baskets then former Cairns guard Melo Trimble (19 points) found his range in the last term with some pivotal baskets after being well held early in the game.

Melbourne looked on song in the opening minutes as Ili nailed a three and Barlow was active on offence to see his side up 13-7.

But The Taipans were still finding their openings to close the gap to 20-18 at quarter time.

Jawai was giving his Taipans a boost off the bench and he went up to 12 points after a power dunk which also tied scores at 39-39.

Goulding started to fire midway through the term with a couple of threes but yet again the Taipans fought back and a three from Majok Deng just before half time left Melbourne up 45-42.

Melbourne’s situation got worse when import Shawn Long drew his third foul and had to sit down just as Jawai continued to dominate inside throwing down a put-back dunk and looking dangerous with every possession.

But Goulding, Ili and United kept making key plays and they held a 68-67 lead going into the last term where they found a way to keep themselves alive taking a seven-point lead early in the term then holding on late as Long nailed a three and a dunk in the final 90 seconds.