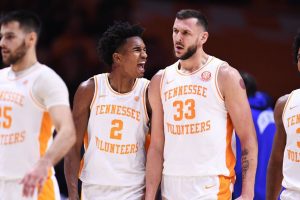 The day before Kentucky’s 63-56 win over No. 5 Tennessee on Saturday, Wildcats coach John Calipari took his team’s devices.

“You know what we did last night?” Calipari said after the game. “I not only collected the phones, I collected the iPads and everything else. And all I told them is we’re getting after this tomorrow. You go and have a great night’s sleep and you’re not looking at anything.”

That game was the beginning of a chaotic Saturday, when 11 ranked teams lost on a single day, tying an AP poll record dating back to Jan. 29, 2011, according to ESPN Stats & Information research.

Nine of the 11 teams that lost on Saturday were on the road. And two of them faced ranked opponents.

Some of those losses had an impact on current conference races. Wisconsin has now lost three in a row in the Big Ten after a 3-0 start. Arizona fell to 4-3 in league play, a significant distance from a first-place UCLA team that’s 7-0. Providence (6-1) is now tied with Marquette for second place behind first-place Xavier in the Big East race. And Clemson is in first place at 7-0 in the ACC, far ahead of a Duke team that’s now 4-3 in league play in Jon Scheyer’s first year as head coach.

“Great environment, great opportunity for us and I know clearly it meant a lot to them,” Scheyer said after his team’s loss to Clemson on Saturday. “[Clemson] played great. Especially in that second half, I think it came down to them getting in our paint too easily. Back and forth the whole way, I thought it was a great game. Both teams struggled to shoot. Disappointed for our guys, thought we were ready to play, thought we fought, thought we were right there. … Disappointed for our guys and we have to learn and grow.”