Lake Buena Vista: The Los Angeles Lakers have won their 17th title to equal the record previously held by Boston after beating Miami Heat 106-93 in game six of the NBA finals.

The Lakers led by 28 points at half-time, the second highest margin in finals history, before going on with the job to win their first championship in a decade nine months after the tragic death of club icon Kobe Bryant. 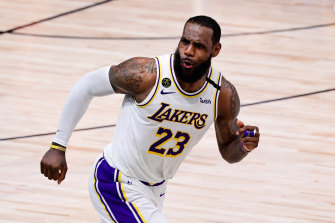 It was also the fourth title for LeBron James, who during the match became the NBA's all-time leader in post-season matches played and lifted the Larry O'Brien trophy with a third franchise after his wins with Cleveland (2016) and Miami (2012 and 2013).

He was named NBA Finals MVP after leading his team to the 4-2 series victory.

James, who won the award during two championship runs with Miami and one with Cleveland, is the first player in NBA history to earn the honour with three different teams.