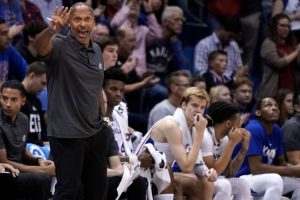 It’s not the official start to the men’s college basketball season this year, but the Champions Classic will still feature the first marquee game of the campaign — and a high-level undercard.

As always, the event — taking place at Gainbridge Fieldhouse in Indianapolis this season — will feature four of the most successful programs in college basketball history: Kentucky vs. Michigan State at 7 p.m. ET Tuesday, followed by Duke vs. Kansas at 9:30 p.m. ET. Both games will air on ESPN.

Because it’s being staged in the second week of the season, each team already has 80 minutes of basketball under its belt; therefore, we have some game analysis and data points to provide insight into all four squads.

Here are four things we’re watching for on Tuesday night:

The reigning consensus national player of the year underwent a knee procedure in October and didn’t play in Kentucky’s first two games of the season. The timeline for his return has been vague, with the school continuing to call him day-to-day. Without Tshiebwe, coach John Calipari used Lance Ware in the starting lineup, and the New Jersey native has provided physicality and defense in the post. But it’s also provided Kentucky a chance to give freshman Ugonna Onyenso an extended look, and he has responded with 15 points, 14 rebounds and seven blocks in 39 total minutes of action.

Michigan State: Was the Spartans’ performance vs. Gonzaga a sign of things to come?

For 25 minutes on Friday, Michigan State looked like a vintage Tom Izzo team. The Spartans were more physical and more aggressive than Gonzaga, bullied the Bulldogs in the paint and were opportunistic in transition off turnovers. Foul trouble eventually became an issue, and Gonzaga settled down with a smaller lineup and came back to win. But the Spartans looked better than expected so early in the season. Can they continue to show that promise against Kentucky? Mady Sissoko outplayed Drew Timme in the first half, finishing with 14 points and nine boards, and Sissoko will need to be up to the task again if Tshiebwe suits up. Tyson Walker and A.J. Hoggard played free and confident, and Malik Hall looked like a potential go-to guy.

Duke: What does a fully healthy Blue Devils frontcourt look like?

In the first two games, Duke played big, with 6-foot-8 Mark Mitchell at the small forward spot, 7-footer Kyle Filipowski at the 4 and 6-foot-10 Northwestern transfer Ryan Young at the center position. And now Jon Scheyer has the services of former No. 1 recruit Dereck Lively II, who missed the opening game due to injury but played 15 minutes against South Carolina Upstate on Friday. Eventually, projected draft lottery pick Dariq Whitehead will return and push for a starting spot on the wing, although that’s unlikely to happen Tuesday. But with Kansas playing small lineups early in the season, will the Blue Devils continue to utilize so much size up front? And given the lack of perimeter depth, do they have a choice?

Kansas: Is Jalen Wilson the guy?

So far, the answer is a resounding yes. But the competition will take a step up Tuesday evening. Wilson, who opened his Kansas career back in 2020 with 23 points against Kentucky and 23 points versus Creighton, has mostly struggled for consistency in the two seasons since. But with the departures of Ochai Agbaji and Christian Braun, Bill Self (and acting head coach Norm Roberts) needed a go-to scorer on the offensive end, and Wilson has responded. He had 19 points and 11 boards in the opener and followed with 21 and nine on Thursday while shooting 6-for-13 from 3. Wilson will need to keep it up against Duke.