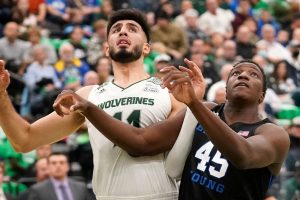 Utah Valley Wolverines center Fardaws Aimaq is your run-of-the-mill 6-foot-11, Afghan-Canadian pro basketball prospect with a black belt in mixed martial arts and a deep devotion to Islam living in a college community of 41,000 undergrads — more than 70% of whom are Mormon — in Orem, Utah.

Just another college kid at heart.

The thing is, that heart, along with a coach in Mark Madsen who once went toe-to-toe with Shaquille O’Neal on a daily basis, has helped turn Aimaq into a legitimate pro prospect and one of the best rebounders in college basketball.

Aimaq’s story begins in bucolic British Columbia, literally and figuratively about as far as possible from the upbringing his father, Faramarz, endured. Raised in Herat, Afghanistan, the nation’s third-most populous city, during the Soviet-Afghan War (an occupation that claimed the lives of an estimated 2 million Afghans), Faramarz Aimaq fled his homeland in 1989 at the age of 19. One of thousands of refugees to leave Afghanistan, he settled in Vancouver after stops in Hamburg, Germany, and Toronto. He later married his wife, Shahnaz, and raised two sons, Fardaws and Faisal, in the western Canadian province.

Late to basketball, “Big Maple,” as Fardaws Aimaq is now affectionately known, spent his younger years developing a mixed martial arts skill set in a variety of disciplines. But by his freshman year of high school, the growing Aimaq was drawn to competitive hoops.

“The one thing I loved about basketball was the team aspect of it,” Aimaq said. “I had never experienced that in MMA, where you train by yourself, but basketball taught me you have to rely on other people. The concept of ‘team’ was very appealing.”

Following a year of prep school in Bridgton, Maine, his college career began at Mercer University in 2018. Aimaq appeared in 29 games as a freshman (five starts) and pulled down an average of 5.3 rebounds in just 14.9 minutes per game. But after coach Bob Hoffman was dismissed following the season, the then 20-year-old felt a fresh start was needed.

“We found out [Aimaq] was in the transfer portal and set up a visit right away,” Madsen said.

“I knew who Coach Madsen was, but I had never heard of Utah Valley,” admitted Aimaq, who agreed to an official visit. While on campus, Madsen worked the young big man out and realized his initial evaluation was wrong.

Aimaq was similarly enamored: “Coach [Madsen] showed me things I never knew before. In that short amount of time, my eyes opened up, and I said, ‘I have to play for this dude.'”

So Aimaq transferred to UVU, the largest four-year university in the state of Utah. Multicultural through its mission statement, there is no direct affiliation with The Church of Jesus Christ of Latter-day Saints at UVU, though a large majority of the student body is composed of Mormons. Aimaq, a practicing Muslim, admitted “for some it can be a culture shock,” but he noted his experience has been wholly rewarding and remarkably congruous.

“A lot of my beliefs are similar [to my peers’] in terms of things that revolve around the concept of religion itself,” Aimaq said.

Per NCAA transfer guidelines, Aimaq was forced to redshirt the 2019-20 season, a period of time he said was essential to his development. “The No. 1 thing I needed to do was shed a little weight,” said Fardaws, who explained he lost 10 pounds, dropping from 270 to 260. “Having a whole season to work on little things and get in the gym more really made a difference.”

In his first career game at Utah Valley last season, Aimaq exploded for 24 points and 18 rebounds, at the time just one carom off the school record. He has since gone for at least 18 rebounds in five more games, established a new program record of 25 boards in a February 2021 loss to Dixie State and posted double-digit rebounds in 32 of the 38 games he has played in a Wolverines uniform — all while becoming the first player in 41 years to average 15 rebounds per game, at the Division I level, when he did so last season.

“He understands angles and trajectories extremely well,” Madsen said. “He has a huge heart and plays with a tenacity on the court where guys are just bouncing off him. Some players don’t know how to get rebounds. He does.”

This season, Aimaq is second in Division I in rebounds per game (13.5), behind only Kentucky’s Oscar Tshiebwe (15.2).

Madsen, who would know, believes his protégé has a future at the next level: “One hundred percent Fardaws is an NBA player. Scouts ask and I tell them, ‘We have a serious talent here at UVU.'”

Not bad for a unique young man in a unique situation.

“I’ve never felt out of place,” Aimaq said. “Everybody here has treated me with respect and love.”

For the second consecutive week, the Ramblers (12-2, 3-0) own the top spot, and did they ever earn it. Coach Drew Valentine and San Francisco coach Todd Golden agreed to an impromptu, nonconference, mid-major heavyweight showdown after both teams lost Quadrant 1 games to coronavirus-related postponements. A text led to a Zoom call that led to a showdown at Salt Lake City Community College — a semi-equidistant location — and thanks to Herculean efforts by both programs (not to mention the staff at SLCC), the game was played. Loyola won 79-74 then followed it up with overtime victories against Bradley and Valparaiso. A huge week.

Next up: at Indiana State (Saturday)

The Cougars (14-3, 2-0) sit atop the WCC following wins over Pacific and Saint Mary’s. Saturday’s victory over the Gaels was a fight in a phone booth, with both teams shooting under 40% for the game. Thursday’s visit to Spokane, Washington, to face AP No. 2 Gonzaga (11 p.m. ET, ESPN2) is an absolute must-see for any self-respecting college basketball fan.

Next up: at Gonzaga (Thursday)

The Aztecs (10-3, 2-0) sent a message to the rest of the Mountain West Conference on Saturday with a 30-point throttling of previously unbeaten Colorado State. Coach Brian Dutcher’s team outscored the Rams 43-17 in the second half, held them to 12-of-43 field goals (28%) for the game and outrebounded CSU 38-21. Yikes. About the only thing capable of slowing SDSU down was the postponement of Wednesday’s game against Wyoming.

Impress your family, amaze your friends … the longest win streak in college basketball now belongs to the Wildcats (13-2, 3-0) — oh yeah, and Auburn too. Coach Bob McKillop’s team made it 12 in a row following Tuesday’s decision over UMass, though extending the streak won’t be easy. On Friday, the Cats visit Richmond, and on Tuesday, they head to VCU. Imagine how good this team would be had it not lost 2,000-point scorer Kellan Grady to Kentucky via the transfer portal this offseason.

Next up: at Richmond (Friday)

The Bruins (12-3, 2-0) returned to action last Thursday after a nearly three-week layoff and spanked Southeast Missouri State by 40. Next, Nick Muszynski, front-runner for OVC player of the year (an award previously won by the likes of Ja Morant and Kenneth Faried), went for 20 points in 22 minutes on Saturday in a 26-point breeze past UT Martin. Your boy, KC, will be glued to Saturday’s battle with Murray State in Nashville, Tennessee.

Next up: vs. Austin Peay (Thursday)

No chance The Committee was dropping the Dons (14-2, 1-0) after that gutsy loss to Loyola. In fact, bouncing back just two days later with an 88-73 win over San Diego only further validates their standing. Jamaree Bouyea continues to lead the WCC in scoring at 17.6 points per game, with Yauhen Massalski also inside the top 10 (seventh) at 14.5 PPG. Cap off your Saturday night with a cold beverage and an eye on BYU-San Francisco inside War Memorial.

Next up: vs. Loyola Marymount (Thursday)

The Rams (12-1, 2-1) were dominated by San Diego State on Saturday (documented above), but let’s not overreact too much. Coach Niko Medved’s team rebounded with a huge win Wednesday night over a rock-solid Utah State team in which the Rams made their final 14 free throws. A 16-point win over Saint Mary’s back on Dec. 4 was cause for The Committee to keep the Rams ever-so-slightly ahead of the Gaels.

Next up: at San Jose State (Saturday)

The Gaels (12-4, 0-1) really struggled offensively in the aforementioned 52-43 loss at BYU, but we’re showing coach Randy Bennett’s squad some leniency. Saint Mary’s had a New Year’s Day game against San Francisco and a Jan. 6 road contest versus Santa Clara postponed due to COVID-19, making Saturday’s the first contest since Dec. 28. Beware the final two weeks of the regular season when SMC finishes at Gonzaga, home to BYU, at San Diego and home to Gonzaga.

Next up: at Pepperdine (Thursday)

The Bonnies (9-3, 1-0) played their first game in nearly a month on Tuesday and finally rid themselves of the taste of that Dec. 17 nightmare against Virginia Tech. Barely. Mark Schmidt rode all five starters nearly the entire 45 minutes of an 80-76 overtime win over La Salle. Olean, New York, will be rocking when VCU comes to town Friday night.

The Committee felt the wrath of Bobcat Nation a week ago, when Ohio was left off the initial rankings. Lesson learned. Ohio (13-2, 4-0) extended its win streak to eight with decisions over Kent State (Friday) and Bowling Green (Tuesday) thanks to two more gigantic nights from MAC leading scorer Mark Sears (19.7 PPG). A Jan. 21 tilt with Toledo could be a conference championship preview.

Next up: at Central Michigan (Saturday)