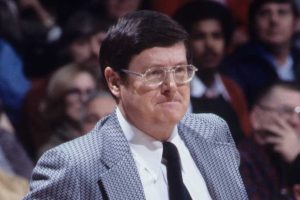 Joe B. Hall, a college basketball coach of 19 years who led Kentucky to a national championship season in 1977-78, died on Saturday in Lexington, Ky. He was 93 years old.

The passing of the College Basketball Hall of Famer was announced by Kentucky’s John Calipari, as well as the Kentucky men’s basketball team:

Hall, a native of Cynthiana, Ky., was a former Kentucky basketball player; he was a member of Adolph Rupp’s 1948-49 national championship team before transferring to play at Sewanee. Though Hall used up his remaining eligibility playing for the Tigers, he did not graduate; he returned to Kentucky to finish his undergraduate degree, graduating in 1955.

Hall began his coaching career at Regis University from 1959-64, compiling a 57-50 record. He then spent a year coaching what was then called Central Missouri State, leading the Mules to a 19-6 record. Following that season, he returned to Kentucky to serve as an assistant under Hall of Fame coach Adolph Rupp from 1965 through 1972. He took over the program in 1972-73, leading the Wildcats for 13 seasons.

Hall compiled a 297-100 record in 13 seasons at Kentucky, with his worst season coming in the second year of his tenure: The Wildcats finished 13-13 and did not make the postseason, the only time of Hall’s career. He also enjoyed plenty of success, bringing in eight SEC championships; 10 NCAA Tournament berths; two NIT berths — including a championship in 1975-76 — four trips to the Elite Eight; two Final Four trips; and the 1978 NCAA Tournament championship, the fifth in Kentucky program history and first in 20 years.

Hall coached seven players to earn All-America honors 11 times. Twenty-four of his players also went onto play in the NBA.

Hall was a beloved figure in Kentucky, even following his retirement. He remained closely tied to the program, attending practices and attending home games at Rupp Arena. He also hosted a radio show with former rival and Louisville basketball coach Denny Crum — called the “Joe B. and Denny Show” — from 2004-14. In 2012, Kentucky unveiled a statue of Hall outside Rupp Arena to commemorate his accomplishments at Kentucky.

His passing created a wave of well wishes and memorials on social media, not only from Kentucky basketball fans, but also the college basketball world at large: