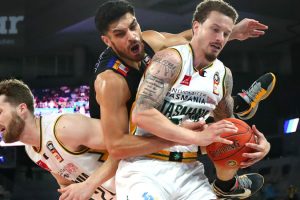 Melbourne United could not cover the pre-game loss of Chris Goulding, their back-to-back championship hopes extinguished by the NBL’s fairytale side on Monday night.

The Tasmania JackJumpers will face the Sydney Kings in the best-of-five grand final series, having edged United 2-1 in their semi-final series. 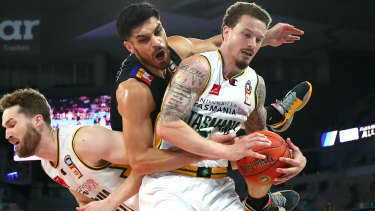 United were dealt a savage blow during the pre-game warm-ups at John Cain Arena when Goulding, in discomfort at shootaround in the morning, aggravated a calf injury he first nicked in the game two loss in Tasmania on Saturday. Without their captain and arguably the league’s most dangerous perimeter threat, United fell apart and lost 76-73.

The JackJumpers were expected to finish at, or near, the foot of the ladder in their debut season, but American coach Scott Roth recruited a squad built on a grinding, scrambling defence and a patient offence and are now the first expansion side to reach the grand final in their maiden season.

They were able to slow the pace after a run-and-gun first quarter and were brilliantly led by the hot hand of American import Josh Adams, who poured in a game high 30 points on 10-22 shooting from the floor, including a defining three-pointer from the corner to give his side a 74-68 lead with just over a minute remaining.

“He hadn’t played that well in the first two games – he saved the best for last,” Roth said of Adams.

Added Adams: “We are on top of the world … we will try to keep it stable for Sydney.” 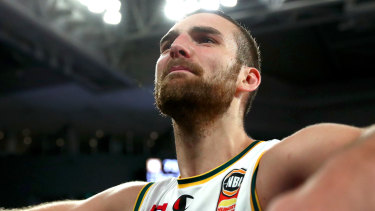 Jack McVeigh of the JackJumpers celebrates his team’s win against United to reach the NBL grand final.Credit:Getty Images

“We just did the work and went through the process when we were 2-6 (win-loss record) … it’s been a celebration for us all year, and we hope that continues,” Roth said.

United are the worst free-throw shooting team in the league despite finishing on top of the ladder and their woes continued, for they were 11-21 from the charity stripe. Their woes from three-point land in this series also continued, finishing the night on a miserable 6-29 from beyond the arc.

Missing Goulding’s punch, Shea Ili top scored with 18 points but more was needed from centre Jo Lual-Acuil, the man third in the league MVP voting finishing with 16 points and seven rebounds. Jack White had 14 points, but missed crucial free throws and was 0-5 from beyond the arc.

Behind successive three-pointers from Brad Newley and Ili and with White active on the boards, United led 19-14 late in the first term, and held a four-point break by quarter-time. But with NBA star and former Adelaide 36er Josh Giddey watching on, the JackJumpers slowed the pace in the second quarter, and the contest turned. 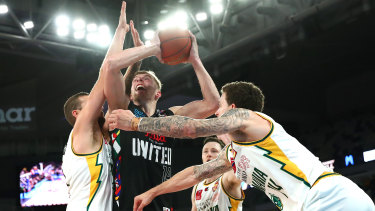 Jack White of United drives to the basket against JackJumpers Jack McVeigh and Josh Adams.Credit:Getty Images

A malfunction with the shot clock midway through the quarter forced a frustrating delay, but United had only themselves to blame for a raft of turnovers, as the angry ants locked the scores at 31 and then took the lead behind a strong drive from Adams. When McVeigh nailed a three from the corner, the visitors led 38-34.

Former NBA champion Matthew Dellavedova responded with a straight-on three – he had only five points for the night with seven assists – but United were held to only 15 points for the quarter, leaving scores locked at 40-40 at intermission.

“We don’t have anything to lose,” Adams said at half-time.

Another technical malfunction forced a delay to the second half, and United soon had their own issues, with turnovers continuing to haunt them. Sloppy ball use led to five-straight JackJumper points, including another McVeigh triple, prompting United coach Dean Vickerman to call a time-out. The huddle was held on the court away from the broadcast cameras, with the robust Dellavedova particularly vocal.

It did not matter, for Adams went on a 10-0 run of his own, including successive triple, as the JackJumpers opened up a nine-point lead. United also fell apart beyond the arc (0-4 from three) and at the foul line, and trailed by six points at the final break.

Vickerman urged his team to turn to their championship pedigree, but United could manage only 14 points in the fourth quarter, Goulding’s absence decisive in the minor premiers beginning their holidays earlier than expected.