Irish coach Brey to step down at end of season 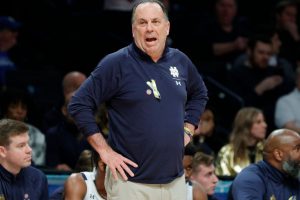 Notre Dame head coach Mike Brey plans to step down at the end of the season, capping a 23-year run in South Bend in which he became the winningest coach in program history.

“It has been a great run for me and our program over the past two decades, but it is time for a new voice to lead this group into the future,” Brey said in an announcement on Thursday. “I want to thank our student-athletes, assistant coaches and support staff who have played such a key role in the culture we have created.”

Brey, one of the most popular members of the coaching fraternity, led Notre Dame to 13 NCAA tournaments, including back-to-back Elite Eight appearances in 2015 and 2016. The Fighting Irish won at least one NCAA tournament game in each of his first three seasons at the helm, including a Sweet 16 run in 2003.

After a four-year hiatus, Brey, 63, guided Notre Dame back to the tournament last season, beating Rutgers in the First Four and Alabama in the first round before falling to Texas Tech. They finished 24-11 last season, 15-5 in the ACC — one game back of Duke for the ACC regular-season title.

Entering the season, Brey was 472-259 during his time at Notre Dame, earning three Big East Coach of the Year awards and leading the Fighting Irish to the 2015 ACC tournament championship. He led the program to 16 20-win seasons.

“Mike and I have talked often in recent years about a future transition in the program’s leadership and during our most recent conversation we reached the mutual conclusion that the end of this season represented the right time,” athletic director Jack Swarbrick said. “That Mike is the winningest coach in the 119-year history of Notre Dame men’s basketball speaks to his skill as a teacher of the game. His even greater legacy, however, lies in his achievements as an educator and mentor of the young men who played for him. In that sense, he represents this University as well as any coach I have worked with during my time at Notre Dame. And for that reason, I look forward to working with Mike to define his future role within Notre Dame Athletics.” The Fighting Irish are in the midst of their worst season under Brey, starting 1-7 in ACC play and 9-10 overall after Tuesday’s home loss to Florida State.

Following the Seminoles defeat, Brey discussed the struggles of this year’s team.

“I defer to our leadership and our captains,” Brey told reporters. “They do have ownership of themselves, but I certainly haven’t been able to help them much. I just told them, I’ve done a horrible job with you, fellas. I thought we would be more ready to compete there. That’s the boss’s responsibility. Totally accountable.”

Before being hired by Notre Dame in 2000, Brey was the head coach at Delaware for five seasons, leading the Fightin’ Blue Hens to two NCAA tournament appearances and two America East regular-season titles.