For the fifth time in team history, the Australian Boomers have finished fourth at a major tournament after falling to France 67-59 in the bronze medal game at the FIBA World Cup. 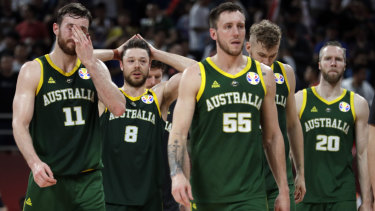 This Boomers team looked so worldly, so assured for so much of this tournament it seemed at times a medal was pre-ordained, but what became apparent in the final term of Sunday night's game was that the team had nothing left in the tank.

The Boomers went all-in to beat Spain in their semi-final on Friday night and after suffering a loss in double-overtime, the prospect of being able to recharge in time for another 40-minute effort appeared bleak.

France were heart-broken about losing their semi-final to Argentina, but they didn't have to play 20 extra minutes of overtime.

Credit to France, when the final term came they took their chance, and credit to the Boomers for an outstanding first half which saw them lead by as much as 15 points early in the third term. 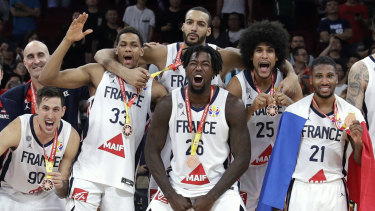 French players celebrate with their bronze medals after the play-off win over Australia.Credit:AP

But it was then the French stirred behind some inspired play from veteran NBA guard Nicholas Batum and former San Antonio Spurs guard Nando De Colo (19 points).

You can never dismiss the effort of the Boomers, nor their engagement with the contest but they were running on empty.

Joe Ingles had 12 points at half time and finished with 17 for the game, Mills had eight points in the first quarter and 15 for the game while the tireless Nick Kay found nine points and some big offensive rebounds but no one else was able to truly find their shot.

Shooting is completed by the hands but starts with the legs – it's the tell-tale sign of fatigue. 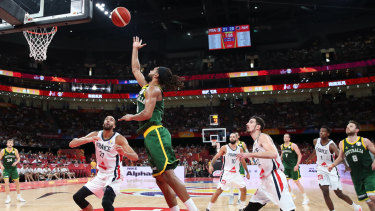 Patty Mills of Australia drives to the basket against Rudy Gobert of France.Credit:Getty Images

Matthew Dellavedova put his body on the line for his side drawing three offensive fouls and picked up a black eye but he was also tiring and went zero from five from the three-point line.

Andrew Bogut was pivotal early with his passing and defensive play while Aron Baynes gave some punch off the bench – but both slowed in the second half and the Sydney Kings will hope Bogut didn't pick up an injury after Vincent Poirier appeared to stand on his foot in the final term.

This was not a question of age or conditioning, it was simple physiology. In their eighth game in 16 days, the Boomers were spent and coach Andrej Lemanis backed his stars to find something extra. 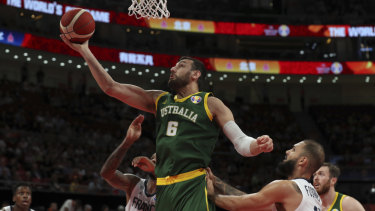 Andrew Bogut of Australia puts up a shot over Amath M’Baye, left, and Evan Fournier of France.Credit:AP

Some will question why the coach didn't try giving Nathan Sobey or Cameron Gliddon a run.

But it must be acknowledged that Mills, Ingles and co had won the right to hold their places, having repeatedly found extra reserves to fight out the team's early round wins.

The French bench proved the difference, out-scoring Australia 38-9. Among them was tiny guard Andrew Albricy, who stepped up with three three-pointers in the second half.

Albricy's last three from the corner proved the back-breaker, stretching the lead to 63-56 with a minute to play.

Australian hopes of scoring a medal in international competition will now be focussed on next year's Tokyo Olympics.

But the national team will be forever changed once NBA All-Star Ben Simmons takes his place. If the Boomers find a way for Simmons to show his strengths without diminishing what the rest of the team do, it could give Australia a vital edge.

As the Boomers trudged off the court in Beijing on Sunday night, Tokyo would have been furthest from their thoughts at that point in time.

This loss will hurt. All that effort has led to nothing once again. Surely one day they will do it.