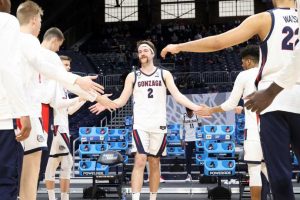 Will the Bulldogs improve to 30-0?

That’s the big question heading into the West Region final between No. 1 Gonzaga and No. 6 USC on Tuesday. Tipoff is scheduled for 7:15 p.m. ET at Lucas Oil Stadium. The game will be televised on TBS.

Gonzaga (29-0) remains the odds-on favorite to win the NCAA men’s basketball tournament under veteran coach Mark Few. This is the Bulldogs’ fourth Elite Eight appearance in the last seven years. Gonzaga has averaged 89.3 points in three tournament games in 2021.

USC (25-7) and coach Andy Enfield continued their run with an impressive 82-68 victory over Oregon in the Sweet 16. The Trojans are the highest seed of the three Pac-12 teams remaining in the tournament, and they are looking for their first Final Four berth since 1954.

They will have to go through the most recognizable West Coast basketball power in the 21st century to get there. The Gonzaga factor only adds to the intrigue.

Here’s everything to know about betting on Gonzaga vs. USC in the 2021 NCAA Tournament, including updated odds, trends and our prediction for the Elite Eight game.

— The Bulldogs have been favored in every game and are 15-12-2 ATS this season. Gonzaga has covered in four of its last five games.

— Gonzaga is 8-4 ATS in nonconference games this season.

Who said the center position is dead? This is a matchup of two athletic post players that will go a long way in determining who reaches the Final Four. Both players have four games with at least 20 points and 10 rebounds this season. Timme has become one of the more viral players in the tournament. How will his footwork translate against Mobley, who averages 3.0 blocks per game in the middle of USC’s zone defense? This is arguably the best individual matchup in the tournament to this point.

Gonzaga vs. USC stat to know

Eaddy is making the most of his third opportunity in the college game. He started his career at Southeast Missouri State before transferring to Santa Clara, where he played against Gonzaga for two seasons. Eaddy has been a clutch player for the Trojans in the tournament and he hit a big 3-pointer to squash an Oregon rally late in the second half in the Sweet 16. Eaddy has failed to score in double figures in just two games since February.

Gonzaga and USC have met just two times, and the Trojans won those meetings in 1991 and 1992. Pac-12 pride is on the line, but the Bulldogs can shoot over the top of it. Gonzaga is hitting 45.3 percent of its 3-point attempts in the tournament, and Timme’s emergence in the post is a lot to overcome. USC will have to play an almost perfect game to pull off the upset. This will be a high-scoring show, but the Bulldogs will keep their perfect record intact.