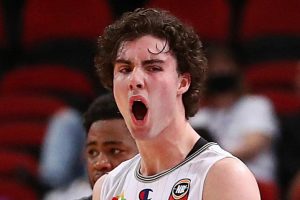 NBA-bound Adelaide 36ers guard Josh Giddey has been released for the remainder of the NBL season to prepare for July’s draft.

The 36ers released a statement on Monday confirming Giddey had been removed from the team’s active playing roster with the club out of finals contention with five regular season games remaining.

The 18-year-old, who came to the 36ers as an NBL “Next Star”, is considered one of the strongest international prospects in the draft, with many observers predicting a top half of first round or draft lottery selection.

Giddey, averaging 11, points, close to eight assists and seven rebounds across 27 games during the NBL 21 season, became the youngest Australian to record three triple doubles, all in the space of two weeks.

He has strongly impressed by demonstrating poise, skill set, and basketball IQ rarely seen in a player of his age.

A major part of Giddey as an ultimate competitor wanted to finish the NBL season, but the 36ers knew they had to do the right thing and sit him out.

Adelaide chairman Grant Kelley, GM of basketball Jeff Van Groningen and the NBL have closely monitored the various factors in play, most important of which are the teen’s future path, health, and readiness for what lies ahead.

While noting his competitive desire to continue playing and contributing to the 36ers on-court results, all parties believe the decision to have Giddey fully focus on his next step is the correct one.

“By this decision, we are supporting Josh in his quest to become an NBA player by maximising his potential in the draft. We wish him every success,” Kelley said.

“Josh has been a credit to himself, his family, and the Adelaide 36ers.

“We are proud for the part we have played over the past 12 months in developing Josh as a player and a young leader.”

Van Groningen also lavished Giddey with praise for his record-breaking maiden NBL season, which has him on path to the NBA.

“Josh has had an incredible rookie season throughout which he has demonstrated the attributes that will propel him onto the NBA stage,” Van Groningen said.

“He’s given everything he can to the 36ers, he’s taken on each and every challenge here and will always be part of the 36ers family.

“At this point though, we want to allow Josh to singularly focus on preparations for the NBA draft. We are with him, we are behind him and we thank him.”

Josh Giddey has been released from Adelaide 36ers’ roster to prepare for the NBA draft. Picture: Mark Metcalfe/Getty ImagesSource:Getty Images

Giddey took to Twitter to thank his fans and the Adelaide franchise, saying simply: ”Thank you, Adelaide 36ers.”

Though not part of the active playing roster for Adelaide’s remaining five games, Giddey will join his teammates as the club looks to finish the season as strongly as possible.

Friday evening’s home game against Illawarra Hawks will be a chance for the Adelaide 36ers fans and members to acknowledge Giddey’s contribution.

The NBA draft will be held in Brooklyn on Thursday July 29, although it remains unclear if Giddey will attend, as he could be selected for the Boomers for this year’s Tokyo Olympics, which start just days before the draft.