Garrick, Magbegor on song as Boomers take down Flames

Garrick knocked down 26 points and Magbegor had 20 points as the Boomers won 94-81 at the State Basketball Centre and improved their record to 7-2 ahead of a showdown with the Southside Flyers at Dandenong next Saturday night. 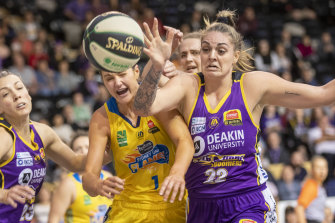 Garrick said her Boomers didn't play their best against the Flames but she feels something special is building as the team still posted 94 points and had 24 assists.

"We did have a focus of coming out and getting our stuff going in the opening minutes but it didn't work out like that," Garrick said.

"We fought back, we showed some good signs and we are really on the edge of breaking through and playing some really good basketball.

"We need to keep fighting it out, keep up our momentum and unleash some great basketball soon."

If there was a criticism of the Boomers, it was that they looked too eager to make the "home run" pass and that led to some untimely turnovers.

Garrick said her shooting didn't feel great early but she worked herself into the game.

Her final two threes came off classy assists from forward Cayla George who had 14 rebounds and eight assists to counter for a tough two-of-12 shooting night.

"I think I came out and rushed a few shots too early but it was just staying balanced and I know my teammates have confidence in me shooting it," Garrick said.

"They were trying to get me the ball and when it's my time to shoot it. I guess it was my night."

Flames star Alice Kunek (24 points) and Colleen Planeta (17 points) gave the Flames a fast start as they punished a wasteful Boomers taking a 20-12 lead into quarter-time.

The Boomers were creating plenty of chances but continued to miss their shots until midway through the second term when Sophie Cunningham (14 points) knocked in seven quick points then Garrick fired up with three threes to see the home side back into the lead late in the term leading 44-39 at half-time.

But in the second half the Boomers went from strength to strength to claim a double-figure win.

Planeta said the Flames knew they could play with the best sides in the league but had to overcome the bad runs during games.

She added Magbegor was a handful once Garrick and other shooters made the defence step out.

"It's the tale of our season – when we are up we go really well but we need to ride those lows better," Planeta said.

"They really took advantage of that. They shot lights out and that was tough.

"Ezi killed it tonight. Garrick had all those threes. When you have that inside and outside game it's very hard to stop."