Anthony Davis was the biggest player on the floor, and the Houston Rockets had no answers.

Davis had 29 points and 12 rebounds, LeBron James finished one assist shy of a triple-double and the Los Angeles Lakers topped the Rockets 110-100 on Friday (AEST) to take a 3-1 lead in their western conference semi-final series. 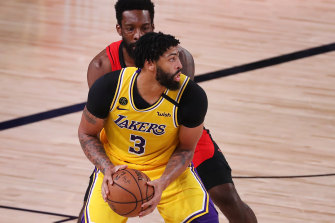 Anthony Davis in action for the Lakers against the Rockets.Credit:Getty Images

The scoring margins were massive: Houston got outscored 62-24 in points in the paint, 17-3 on second-chance points, 19-2 on fast-break points.

“We know we’re in a big hole now, but the next game is the game we’ve got to win,” Rockets coach Mike D’Antoni said. “We’ll go out and if we lay it on the line like the way we did in the fourth quarter, we’ll be fine.”

The Lakers were up by 23 midway through the fourth, well on their way to a blowout win. That’s when Houston’s offence woke up.

Westbrook made a corner three with 3:01 left, Harden got a steal and a pair of free throws on the next possession, and the Rockets put together a 18-2 run to get within 103-96. The Lakers turned the ball over on four consecutive possessions during that stretch, giving Houston life.

“I think we did a good job getting more aggressive, and that led to a lot more opportunities offensively," Harden said.

Harden was then asked why the Rockets were flat through three quarters.

“Good question," Harden said, later adding, “there's nothing we can do about it now."

“Obviously, we've got to be better," James said. “We've got to close out games the right way."

Game five is on Sunday (AEST).