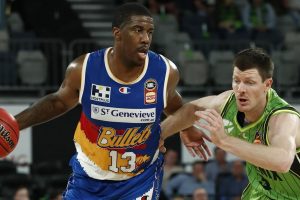 The Brisbane Bullets have kept their finals hopes alive, grinding out a scrappy win over a disappointing South East Melbourne Phoenix outfit, 94-82.

Coming into the night having lost six of their last seven games, the Bullets’ season regained a pulse behind a season-high 27 points from Lamar Patterson and a big second half from Nathan Sobey.

Falling behind 37-36 on a Kyle Adnam triple with 9:06 to play in the third, the Bullets broke the game open by finishing the period on a Sobey inspired 33-22 run.

Struggling for just six points on six shots in the first half, the marksman appeared to find his rhythm on a highly contested long-range bomb from the left corner in front of the Phoenix bench. The shot sparked a nine-point period for the sharpshooter, with the Bullets leading scorer tallying 20 for the night.

Maintaining the double-digit lead for much of the fourth, Patterson delivered the dagger on a 3-point make with 1:56 to play, giving Brisbane an 88-77 edge.

For SEM, the game represents a wasted opportunity, with lax defence and a porous 6-for-26 shooting clip from three leaving them vulnerable in fourth place on the ladder with a month to play.

Missing the previous five games with a groin injury, Ryan Broekhoff checked into the game at the 5:34 mark of the first quarter. Showing signs of rust, the star forward missed his first four shots before being forced out of the game.

Crossing the lane through traffic during the second quarter, Broekhoff caught an inadvertent elbow to the face from Sobey, who was trying to shake off some close attention from Kyle Adnam. Broekhoff was able to head to the locker room under his own power with a towel over his left eye. No foul was called on the play and he would not return, finishing the night scoreless in seven minutes.

Broekhoff was reportedly suffering from blurred vision, heading to Epworth Hospital to be assessed.

Playing in just his fifth game with the Bullets, Lamar Patterson sent an early warning signal, burying a triple from the left wing on the first possession of the game. From that moment on, the two-time All-NBL first teamer would overwhelm the Phoenix defence, using his size to consistently put pressure on the Phoenix paint defence.

It’s been a tough season for Patterson thus far, but if Brisbane are to make a playoff push, Patterson is likely to be the major key.

HERITAGE ROUND PROVIDES NO CLASH

NBL heritage round will provide plenty of nostalgia this weekend, with clubs around the league donning jerseys from days gone by. In this clash, Brisbane wore a classic blue strip from the 90s while the Phoenix displayed a lime green uniform. Not a jersey clash was in sight, providing a delightful viewing experience for the fans. Perhaps another prominent league in Australia could take some hints from the NBL …