Bucks on the verge of eliminating Baynes’ Boston Celtics

Aron Baynes's Boston Celtics are one game from being eliminated from the NBA playoffs after Milwaukee Bucks superstar Giannis Antetokounmpo had another monster night at TD Garden.

The Bucks won game four 113-101, despite playing in front of a fierce Boston crowd on Monday (Tuesday AEST), to take a 3-1 series lead and give themselves a chance to finish the Celtics off in Wednesday's game five in Milwaukee and secure a spot in the Eastern Conference finals. 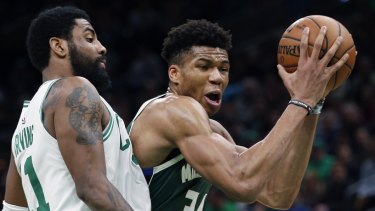 Antetokounmpo, a favourite to be named NBA MVP, dominated with some ferocious dunks on the way to 39 points, sinking 15-of-22 field goals and adding 16 rebounds and four assists.

"It is amazing man," Antetokounmpo said. "The whole group played hard, were ready and stepped up."

The Celtics' Kyrie Irving led Boston's scoring with 23 points, but missed 15 of his 22 field goals and six of seven three-pointers.

Irving, who can become a free agent at season's end, left the court to a lone fan shouting at him, "Don't leave!"

Boston coach Brad Stevens had considered giving Australian Baynes more court time in an attempt to control Antetokounmpo, but the big Queenslander was scoreless and had just two rebounds in six minutes.