Brisbane's renaissance in the NBL has continued with a 95-85 win over the New Zealand Breakers, built on the muscle of their big men.

Traditionally struggling in Auckland, the Bullets controlled the contest on Sunday over the final three quarters to make it four wins from their past six. 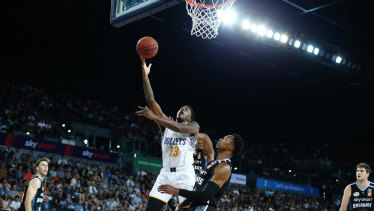 Lamar Patterson of the Bullets goes to the basket against the New Zealand Breakers at Spark Arena in Auckland on Sunday.Credit:Getty Images

Both teams went into the contest locked on the same 9-11 record, but the visitors emerged with the better shot at reaching the finals, helped by a friendly schedule to end the regular season.

They will be hard to beat if they get the same production out of their inside men, who combined to dominate the rebound count 43-32, while Will Magnay pulled off four blocks. Brisbane scored 54 points in the paint, which eclipsed the hosts' 34.

In an impressive team performance, Cam Gliddon scored 11 of his 14 points in the final quarter and Matt Hodgson snared 10 rebounds.

The result is a body blow to the Breakers, whose five-game winning streak was snapped three days ago in Cairns.

They looked tired, giving up an early 11-point lead to trail by 10 at halftime after Brisbane poured in 34 points in the second quarter.

New Zealand failed to challenge for the lead from then, despite 17 points each from captain Tom Abercrombie and guard Sek Henry, who was a late clearance to play after struggling with a calf injury.