Lamar Patterson’s hot hand wasn’t enough to help the Brisbane Bullets, whose NBL road woes continued with a 96-85 loss to the New Zealand Breakers in Auckland.

American forward Patterson scored 36 points, a career-high in the NBL, but fatigue caught up with him in the final quarter when his influence waned and the Breakers held on for their fourth win of the season.

The seventh-placed Bullets have lost six of their past seven on the road and slip to 6-8 for the season, with the Breakers (4-9) one spot behind them on the ladder. 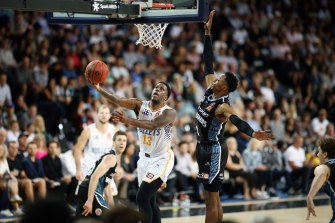 It was a crucial result for the Kiwi hosts, who suffered another setback in a tumultuous season when American import Glen Rice Jr. was sacked earlier on Monday, for a breach of his bail conditions.

They were also without rising star RJ Hampton, who is awaiting scan results on a hip injury.

Those blows were countered by the return from injury of big-scoring guards Corey Webster and Scotty Hopson, who were both influential.

The Brisbane stats sheet was more lop-sided. While Patterson’s haul was the most by any Bullets player since their return to the NBL in 2016, their next biggest contributor was Jason Cadee with 11.

Three-point shooting was a major differential, with the hosts landing nine of 21 compared to Brisbane’s lamentable six of 25 from beyond the arc.

Both teams spurned decent early leads to be level 47-47 at half-time but the New Zealand held sway after the main break, helped by some spectacular Hopson dunks in the final quarter.