One key Boomer fouled out early but his teammates rose in his place as Australia kept its FIBA World Cup quarter-finals hopes alive on Saturday.

The Boomers came into their second round clash with the Dominican Republic as heavy favourites, but wiser heads knew Nestor Garcia's men wouldn't go down easy and that proved to be the case until Australia broke clear in the last term to win 82-76.

NBA centre Aron Baynes fouled out during the third term after receiving his fourth foul and then a technical foul for remonstrating with an opponent but Patty Mills, Andrew Bogut and young big man Jock Landale all lifted to make sure of the win. 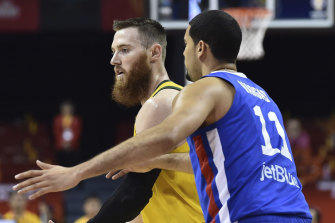 Aron Baynes of Australia looks to pass around Eloy Vargas of the Dominican Republic.Credit:AP

If France beat Lithuania, scheduled for late on Saturday night, the Boomers and France will be through to the quarter-finals. But if the Lithuanians win then the Boomers must beat France on Monday night or face the prospect of being eliminated on points differential because their two opponents have far greater winning margins from their earlier games.

Mills led the Boomers with 19 points and nine assists while Chris Goulding was again outstanding with 15 points and Landale had 13 points, most of them after Baynes left the game.

Bogut offered eight points, seven rebounds and six assists in an invaluable role off the bench.

Australia again had a whopping 30 assists on 30 made baskets, but their 16 turnovers were again concerning. 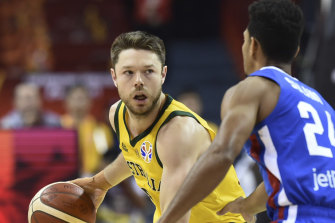 Matthew Dellavedova of Australia is pressured on defence by Gelvis Solano of the Dominican Republic.Credit:AAP

The Boomers came out looking on the verge of breaking the game open early as their passing and movement, but they could only take a 24-19 lead at quarter time.

Term two was much the same as the Boomers ran some sharp offence to allow Mills, Goulding and Baynes all reap rewards as the speedy Dominicans kept the game close.

Goulding's three looked to have given Australia a seven-point lead at half time but a rushed shot gave their opponents a last shot and power forward Luiz Montero made a three off the backboard on the buzzer to cut the margin to 40-36 at the break.

It was a sign of the struggles to come. 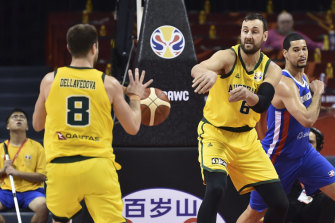 Andrew Bogut helped the Boomers stay composed in their tussle against the Dominican Republic.Credit:AP

The third term saw the Boomers more deliberate in their approach as Bogut continued to set-up his teammates and Baynes looked to impose himself.

But the Phoenix Suns big man went a little too far when he threw down a powerful two-handed dunk at one end, but at the other fouled guard Gelvis Solano as he attempted to dunk on the Boomers centre. Baynes’ response saw him receive technical foul.

That was fouls four and five for Baynes, which saw him foul out with 10 points and five rebounds in 16 minutes.

Bogut, Nick Kay and Jock Landale all had to step-up to replace Baynes and it was no surprise that Bogut took the lead setting up Mills for a lay-up and then a corner-three as the Boomers again went up by seven points.

Mills, Matthew Dellavedova and Landale all were outstanding in the last term as the Boomers took the win.

The Boomers play France in their last second-round game on Monday at 10pm (AEST).