Perth: The Boomers have been given a major reality check ahead of the basketball World Cup, suffering a shock 90-70 loss to a third-string Canada outfit at Perth's RAC Arena.

The Boomers were expected to post a double-digit victory over Canada, but found themselves trailing by 15 points early in the third term. 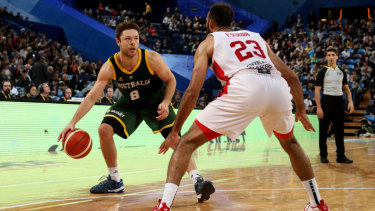 Matthew Dellavedova of the Boomers comes up against Phil Scrubb of Canada on Friday night.Credit:AAP

In a frenetic comeback, the Boomers levelled the scores later that quarter, but Canada soared clear again to secure victory.

Mills (20 points) and Jock Landale (17) tried their best to keep the Boomers in the contest, but Canada's superior shooting proved the difference.

Kevin Pangos (18 points) and Andrew Nembhard (12) were among five players to hit double figures for Canada.

The Boomers have set their sights on winning a medal at the World Cup in China. Some of the players have even stated publicly they want that medal to be gold.

But going on Friday's display, the Boomers have plenty of work to do – and precious little time to do it.

The Boomers face Canada again on Saturday night, before travelling to Melbourne for two games against the USA. 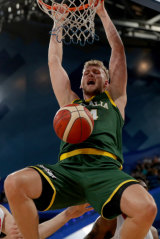 Their first World Cup game is on September 1 against Canada.

Canada made a stunning start to Friday's match, unleashing a series of long bombs to race out to an 18-8 advantage.

But another surge from Canada extended the margin back out to 12 points late in the second term.

The Boomers' shooting was clearly off, nailing just 16 of their 39 field-goal attempts in the first half.

The lead ballooned out to 15 points early in the third quarter, but Mills and Chris Goulding helped to spark a frantic comeback that levelled the scores late in the term.

With a late flurry of points, Canada eased out to seven points at three-quarter time and were not troubled in the final quarter.

But on Friday night, just one was part of their squad – Khem Birch.

Cory Joseph might link up with the squad in time for the World Cup, but doubts are growing as to whether he will turn up.

Star Boomers centre Aron Baynes didn't play on Friday, but is expected to suit up on Saturday night.